Buescher Caught Up in Early Wreck at Talladega 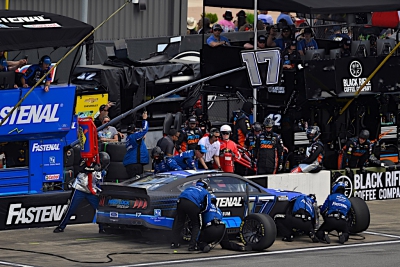 Chris Buescher headed into Talladega with confidence and was setting himself up for a late run in Sunday’s race, but an unfortunate incident ended his plan and sent the No. 17 team home early.

When the green dropped, Buescher hovered around the back half of the pack until his first pit stop for two tires and fuel on lap 34. As the pack formed back up, Buescher was in the outside lane gaining ground with less than 10 laps to go in stage one.

Then, with three laps remaining, the No. 16 car slowed in turn three, causing a chain reaction wreck that left the Fastenal Ford no place to go, ending the day early.

Next up on the schedule is Dover Motor Speedway, where Sunday’s action is set for 3 p.m. ET on FS1. Race coverage can also be heard on PRN and SiriusXM NASCAR Radio.