Burton Qualifies 24th on the Dirt at Bristol 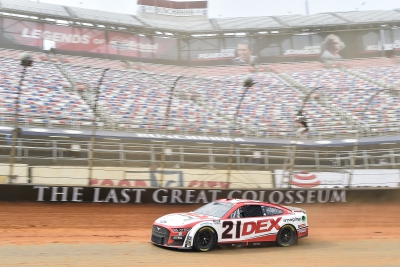 Harrison Burton and the No. 21 DEX Imaging team got off to a relatively slow start on the dirt at Bristol Motor Speedway but have shown steady improvement as the race weekend rolls on.

In Friday’s opening practice, Burton, who had never raced a Cup car on dirt, was 36th fastest. His best lap was at 87.024 miles per hour.

The second and final practice session saw him move up to 29th on the speed charts, with a best lap at 85.478 mph.  He was 26th fastest in the 10-consecutive-lap category.

On Saturday, Burton lined up ninth, at the back of the field, for the fourth 15-lap qualifying race as starting spots were determined by a random draw.

As the laps wound down, he took eighth place from Cody Ware, then passed Aric Almirola with two laps to go to finish seventh.

His finishing position, added to the points he earned for the two passes, put him in 24th place for the start of Sunday night’s 250-lap Food City Dirt Race.

The green flag is set to fly just after 7 p.m. Eastern Time with TV coverage on FOX.