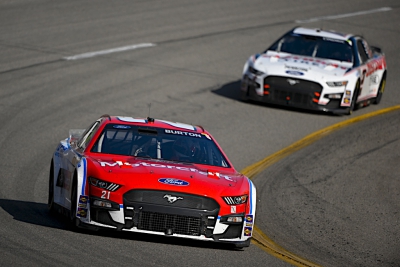 Harrison Burton and the No. 21 Motorcraft/Quick Lane team came away from Sunday’s 400-lapper at Richmond Raceway with an 18th-place finish and a confidence boost as they work their way through Burton’s – and crew chief Brian Wilson’s – rookie seasons.

Burton lined up 17th for the start of Sunday’s race on the three-quarter-mile Richmond oval.

He moved up to 15th place by the 15th lap and was able to consistently run competitive lap times, especially early in green-flag runs.

Burton ended the first 70-lap Stage in 20th place, then worked his way forward in the second Stage and ended that segment in 16th place.

The race was slowed by just three cautions for incidents on the track, which necessitated several green-flag pit stops. The Motorcraft/Quick Lane crew had a great day on pit road, highlighted by one sub-10-second stop.

As the laps wound down, Burton continued to post good lap times but was unable to pick up positions he’d hoped to get.

“It’s frustrating because I feel like we were better than 18th, but track position is really hard to get here now,” Burton told reporters after the race. “We struggled with being aero tight behind guys, so it was really hard for me to kind of move forward throughout the run because of that.

“I felt like we had a pretty decent Motorcraft/Quick Lane Ford Mustang. If we keep going in this direction, I feel like we’re getting a little better every time.

Burton moved up one spot in the Cup Series standings to 29th place but closed the gap to 25th place from 22 points to 10.