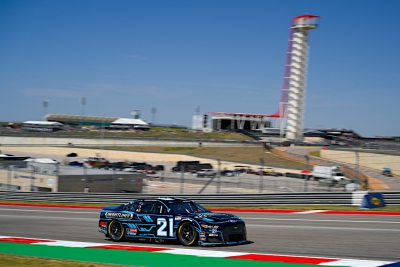 Harrison Burton and the No. 21 Freightliner team came away from Sunday’s EchoPark Texas Grand Prix at Circuit of the Americas with a 17th-place finish plus six Stage points.

Burton lined up 19th for the start of the Cup Series’ first road race of 2022, and ran outside the top 20 until the closing laps of Stage One when crew chief Brian Wilson elected to stay on the track while others ahead of the Freightliner team opted to make pit stops.

After making his pit stop during the caution period following the end of the Stage, Burton returned to the track in 28th place. He gained six spots before the team used their Stage One strategy again, moving up to seventh at the end of that 15-lap run. He earned another four points there.

In the third and final segment of the race, the No. 21 team found more speed and Burton had moved into the top 15 before being collected in a crash that damaged the right front of his Mustang.

After the pit stop and fresh tires, he returned to the track in 29th place and had worked his way to 23rd when another caution flag set up an overtime finish.

“It was a good day,” Eddie Wood said. “For the first road-course race of the year it went really well.

“Harrison didn’t get turned around or spin on his own, and he made up some spots there at the end.”

Wood went on to say it was a good day for the entire Freightliner team.

“The pits stops were good,” he said, adding that crew chief Brian Wilson made good decisions from the pit box. “The strategy was good. There was a lot of back and forth about when to pit because there were so many options.

“The ones he chose worked out.”

Burton and the No. 21 team now head to Richmond Raceway for next Sunday’s 400-lap run.