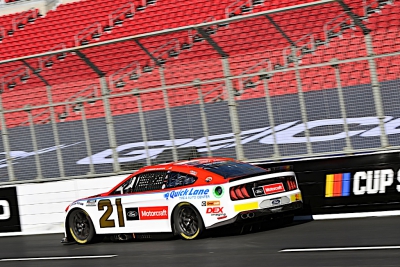 By most accounts, the inaugural Busch Light Clash at the L.A. Coliseum, an all-new event for NASCAR, exceeded expectations. The same can be said about rookie Harrison Burton and the No. 21 Motorcraft/Quick Lane team.

Just to make the starting field for the 150-lap Clash, Burton had to be smart at times and aggressive at others. And he needed some luck.

But it all came together when it counted and he made the big show, where he drove from 22nd starting place to 12th at the checkered flag of the main event.

“We came a long way from our first practice to where we are now and we learned a lot about us and learned about our car as well,” Burton told reporters at the track. “I made a mistake and got into Ricky [Stenhouse Jr.]

“I feel bad about that. That was just a plain mistake. I talked to him and he seemed good with it, so I appreciate that. Overall, it was just a crazy day.”

Like others he was impressed with the atmosphere at the Clash.

“This is an amazing event, seeing all the fans and the National Anthem and the crowd going nuts was a really cool experience for me,” he said. “This is just my second race, but the first two times in Cup have been Talladega and now this event, so pretty cool event to do it and just proud to drive this 21 Wood Brothers Ford.”

It took a spirited drive – and a penalty on Ty Dillon – for Burton to make the starting field for the Clash.

Burton qualified an impressive 10th on Saturday, which put him starting third in his 25-lap heat race. He got up to second place in the early going but wound up eighth, which put him in the second of two 50-lap Last Chance Qualifying races.

It was there that Burton and the No. 21 Motorcraft/Quick Lane Mustang began to show some real muscle.

Starting fifth, Burton ran in the top five for the first half of the race, which was relatively uneventful compared to the frenetic final laps.

He first moved into third place (which was key as the top three advance to the main event) with 20 laps to go. He dropped back on a couple of occasions then made a bold move from fifth place to first with just six laps to go.

Burton led Laps 45-47 but was spun from the top spot with three laps remaining.

He lined up seventh for a three-lap shootout and drove his way to fourth place at the finish, which wound up being just good enough to make the main after Dillon was disqualified by NASCAR for jumping the final restart.

The rookie driver said he was as aggressive as he needed to be.

“I race people hard and race them how they race me,” he said. “Aside from my mistake with [Stenhouse], I wouldn’t change anything I did today [Sunday]]. I’m just proud of that, and when I lay my head down tonight I can know that I did my best job.

“We got used up. Our back bumper is pretty demolished, but that’s part of being a rookie, and everybody’s got to pay their dues. I understand that, but you can’t get pushed around either.

“There are too many people paying an exorbitant amount of money for me to be here and believe in me too much to just get pushed around.”

Burton said that while the race was a non-points exhibition, he believes it’s a good sign of things to come for him and the Motorcraft/Quick Lane team.

“I just think that we know we can do it,” he said. “There were times where we showed really good speed, and we’ve got to start somewhere.

Eddie Wood said he was pleased with what he saw from Burton, crew chief Brian Wilson and the rest of the Motorcraft/Quick Lane crew. And he offered congratulations to Ford Performance and Team Penske for taking the checkered flag in the inaugural Clash at the Coliseum

“It was a good day all around,” Wood said. “Joey Logano and Team Penske put together a great win, and our team stepped it up to get into the race through the Last Chance Qualifier, which was a major accomplishment in itself.”

The 21 team’s performance at the Coliseum also had special meaning for the Wood family and the team’s fans as the Motorcraft/Quick Lane Mustang carried a decal honoring the memory of Len Wood’s wife Nancy, who passed away Dec. 11, 2021, after a battle with cancer.

Mrs. Wood was an ardent supporter of the family race team and a beloved member of the NASCAR family.

The decal also will be on the No. 21 Mustang for the Daytona 500 on Feb. 20 and the first race at Martinsville Speedway, home track for the Wood Brothers.