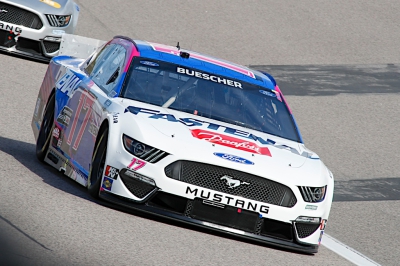 Chris Buescher battled for 400 miles of racing at Kansas Speedway Sunday afternoon, turning in a 12th-place finish to rebound as one of only 15 cars on the lead lap.

The No. 17 Fastenal Ford would line up where it finished a week ago in Texas in 21st. At the onset of the race, Buescher fell to the 25th position before a caution for weather occurred on lap 9. When the race resumed on lap 15, he used the remainder of the 80-lap stage to drive up to 14th.

During a caution-free stage two, the No. 17 team would work on the long-run speed of the car. Buescher managed to stay around the top-15 for the majority of the stage, but unfortunately would fall a lap down during the near 80-lap green flag cycle. The No. 17 would round out the second stage in the 16th position.

To begin stage three, Buescher would find himself racing for the lucky dog spot, which he would earn as the caution flew with under 50 laps remaining. Lining up 13th for the final restart, Buescher and the No. 17 Fastenal team would hold their own for a 12th-place finish at Kansas Speedway, his tenth finish inside the top-12 this season.

The No. 17 team is back next weekend at Martinsville Speedway, where short track action Sunday is set for 2 p.m. ET on NBC. It can also be heard on MRN and SiriusXM Channel 90.