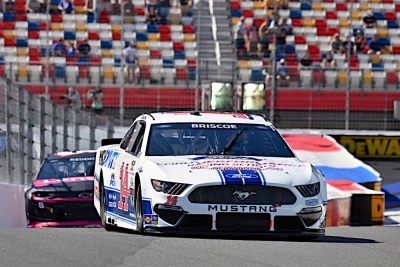 ● The Ford Performance Racing School/HighPoint.com driver gained four spots on the opening lap and was 16th by lap four.

● Briscoe made a scheduled pit stop under green on lap nine for tires and a chassis adjustment to give the No. 14 more grip. When the yellow flag was shown the next lap for the competition caution, he was scored 29th.

● He restarted 18th on lap 14 and was 17th when the next caution occurred on lap 21. He pitted again for tires, fuel and another adjustment to help with forward drive and resarted 17th on lap 23.

● Under caution, Briscoe reported the No. 14 Ford Mustang shut off when exiting the bus stop on the backstretch. Crew chief Johnny Klausmeier called him to pit road for tires and fuel. He restarted 28th for the second stage.

● Briscoe was making his way forward, but contact from the No. 47 in turn 17 sent his Ford Performance Racing School/HighPoint.com Mustang spinning. He made it to pit road for fresh tires and a track bar adjustment before the lap-36 restart.

● Briscoe made a scheduled green-flag pit stop from 18th on lap 48 for tires, fuel and adjustments. He radioed prior to the stop that the No. 14 had become too tight. He rejoined the field in the 26th position and held there until the end of the stage.

● He began to lose ground as cars with newer tires caught up and was 21st before reporting that he needed more forward drive and front turn on lap 71.

● On lap 76, Briscoe made a scheduled stop under green for tires and an adjustment to help with left-hand turns. He was scored 28th after the visit to pit road.

● The Ford Performance Racing School/HighPoint.com driver battled a tight-handling Ford Mustang while running 28th before a caution with 11 laps remaining gave the team one last chance to make adjustments.

● With fresh tires, Briscoe restarted 29th with seven laps to go and took the checkered flag in the 22nd position on lap 109.

● Briscoe was the highest finishing NASCAR Cup Series rookie for the 27th time this season.

● Kyle Larson won the Bank of America Roval 400 to score his 13th career NASCAR Cup Series victory, his series-leading seventh of the season and his first on the Roval. His margin over second-place Tyler Reddick was .782 of a second.

● There were nine caution periods for a total of 18 laps.

● Thirty-one of the 39 drivers in the Bank of America Roval 400 finished on the lead lap.

“Our handling was so off today, and the team continued to make adjustments on it but it just wasn’t stable enough to outbrake guys and make up any ground. We finally got to a place where it was much better in the last 20 laps or so, but we’ll have to go back and look at what we can do to start off in a better place in the future.”