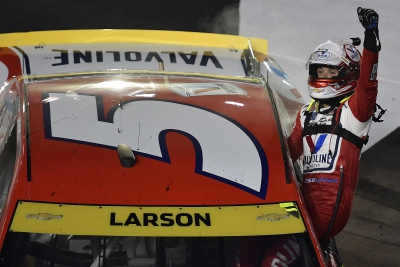 Kyle Larson continued his dominant 2021 campaign, capturing the checkered flag at Bristol Motor Speedway for the first time in his career. The driver of the No. 5 Valvoline Chevrolet earned his sixth win of the season, and 12th career win in the final race of the Round of 16.

Leading a race-high 175 laps, Larson's race-winning pass was anything but easy, as he had to maneuver around 21-year veteran Kevin Harvick, who led 71 laps on the night. Harvick was stuck behind Larson's teammate Chase Elliott, who Harvick had made contact with about 30 laps prior while battling for the lead, resulting in a cut tire for the reigning Cup champion, putting him multiple laps down.

Using a slide-job to complete the pass with four laps to go, Larson won the race by a margin of .227 seconds.

"That was an awesome race, it was so cool to be able to race for the win. Obviously Harvick and Chase got together and Chase was upset, and kind of held him up," Larson said on the NBCSN telecast. "It got Harvick having to move around, and use his tires up off the bottom (of the track) and I started to get some diamonds working off (turns) one and two, and just got a big run and decided to pull the trigger and slide him," he added.

Harvick was able to hold on for a second-place finish, and was followed by William Byron -- who made the Round of 12 by two points -- in third, Ryan Blaney in fourth and Alex Bowman in fifth.

Elliott and Harvick approached each other on pit road after the race, as frustrations boiled over. With boos from the crowd raining down on him, Harvick shared his perspective:

"I just told him, you know, that it was kind of a chicken [expletive] move that he did there at the end," Harvick said. "We were racing for the frickin' win at Bristol, we're three-wide in the middle and he throws a temper tantrum. I was just trying to get the lead and race him hard, and then he pulls up in front of me and just sits there until I lose the whole lead. ... I'm ready to rip somebody's frickin' head off."

Said Elliott, who led 129 laps on the evening: "It's something he does all the time, he runs into your left side constantly at other tracks, and sometimes it does cut down your left side, and other times it doesn't. He did it to me at Darlington a few weeks ago because he was tired of racing with me. Whether he did it on purpose, it doesn't matter -- at some point you've got to draw the line. I don't care who he is or how long he's been doing it, I'm gonna stand up for myself and my team and we'll go on down the road."

The drivers later continued their discussion in the No. 9 hauler in the garage area, as they hope to settle their feud before the Round of 12 begins next weekend.

Rounding out the top-10 were Brad Keselowski in sixth, Martin Truex Jr. in seventh, Erik Jones in eighth, Denny Hamlin in ninth and Matt DiBenedetto in 10th.

Playoff driver Aric Almirola recovered to finish 18th after an oil line leaking issue during the first third of the race, but was ultimately eliminated from the Playoffs by just two points.

The same can be said for Richard Childress Racing driver Tyler Reddick, as a loose lugnut forced him back to pit road about halfway through the race; although he was able to rebound for a 12th-place finish, he also finished two points below the cutline.