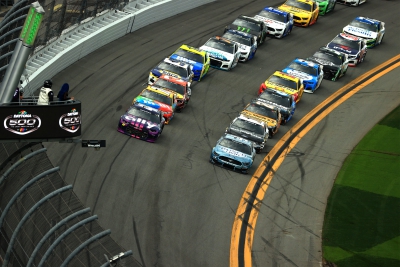 The field takes the green for the 63rd Daytona 500 to start the 2021 season on February 14th, 2021 in Daytona Beach, Florida Mike Ehrmann | Getty Images

The 26-race regular season is over, and the playoffs are set; 16 teams to compete for a championship. Each driver with their own path to the dance floor, some more difficult than others, and for most it took a trip to victory lane to find their way here.

Hendrick Motorsports’ #5 has been the most dominant team all year and the most deserving of the regular season championship. Larson is the favorite to hoist this year’s trophy in Phoenix.

Team Penske’s #12 disappointed the underdogs with a win in the season finale at Daytona as this team rides a wave of momentum with two wins and six top fives in the last nine races.

Joe Gibbs Racing’s #19 continues to be a perennial champion favorite despite an up and down season the team looks ready to make a run to the final four.

Joe Gibbs Racing’s #18 usually leads the win column, but despite only two wins the teams consistency has provided enough points for what should be, another final four appearance.

Hendrick Motorsports’ #9 performance has been behind teammate Larson all season, but the most popular driver could easily best the #5, especially at Phoenix, one of Elliot’s best tracks.

Hendrick Motorsports’ #48 has figured out winning despite inconsistency. They might not have what it takes to win the championship, but the team’s growth is promising.

Hendrick Motorsports’ #24 has shared in the organizations great season with competitive showings every week, it will be interesting to see what this young driver can do in the playoffs.

Team Penske’s #22 recent struggles are concerning with only one top five in the last ten races. They might still have a chance at a championship, but the team needs to turn it around now.

Team Penske’s #2 and everyone behind them have failed to garner enough points to make this year’s playoffs easy. Hopefully Brad can make the best of his last ten races with the team.

Chip Ganassi Racing’s #1 has performed well for the team in it’s final year, but it’s unlikely to be enough for a championship, however the veteran Busch has what it takes to make a good run.

Joe Gibbs Racing’s #20 is behind the rest of the organization, but rookie driver Bell has shown potential including a win this year. The team is competitive and could make the round of eight.

Front Row Motorsports’ #34 is this year’s biggest wild card with their Daytona 500 win. If the team makes it past the first round, the roval provides an opportunity, but the odds are very slim.

Stewart-Haas Racing’s #10 was the worst among an underperforming organization with high expectations. Almirola’s win at New Hampshire will likely remain their seasons highlight.

Richard Childress Racing’s #8 has the best young driver in Reddick, but their equipment doesn’t match his talent. The combination was enough to make the playoffs which is promising.

Stewart-Hass Racing’s #4 is the only hope for the organizations forgettable season. While it’s a long way to Phoenix it’s only a 20-point deficit from 4th, and we can never count out “the closer”

Could of, should of, would of; unfortunately for these drivers they will have to do better next year.

Originally from central New York, I was first introduced to NASCAR through my uncle. I quickly developed an interest in the sport that has only grown over the last 20 years. I have a bachelors degree in agriculture business from SUNY Cobleskill, and currently work as an operations manager in New Jersey. In 2017 I thru-hiked the Appalachian trail, and since have been focused on pursuing my passions in life such as motorsports.