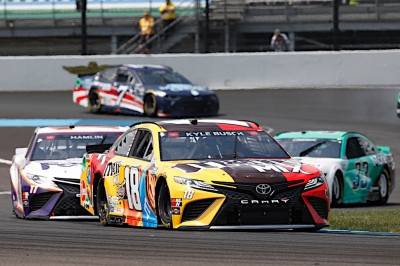 ● The No. 18 M&M’S MIX Toyota had a disappointing qualifying position of 21st but didn’t stay there for long, as Busch moved up into the top-15 by lap four and up to 12th by lap six.

● Busch came to pit road for the first time on lap 12, three laps short of the end of the stage.

● With many cars choosing to stay out until the stage break, Busch finished 18th in Stage 1.

● The Las Vegas native moved up to eighth on the restart after the cars that stayed out the full first stage came to pit road during the stage break.

● Busch moved up very quickly through the field following the restart, running fourth on lap 22 and up to third by lap 26.

● The M&M’S MIX driver maintained his third position until he came to pit road on lap 33 to take on four tires, fuel and a wedge adjustment.

● Again, several other teams decided to stay out the entire stage, and Busch came home 12th for Stage 2.

● The M&M’S MIX driver was back up to third on the restart for the final stage after several cars pitted during the stage break.

● Busch slipped to fifth shortly after the restart.

● The two-time Cup Series champion found himself in the top-five when a late-race caution came out, forcing most of the field to come down pit road and take on their last set of tires.

● The No. 18 team got Busch two spots off pit road, and he restarted seventh.

● Busch picked off several spots and found himself well-situated in fourth for what looked to be a six-lap shootout.

● But in an unfortunate turn of events affecting Busch and several other drivers, the track curbing in turns five and six came up. Contact with the loose curbing tore out the oil pan of William Byron ahead of Busch, sending Byron, Busch and countless others spinning through the grass.

● Busch had left-front damage that needed to be repaired by the M&M’S Mix team, putting the chance of a win out of reach. Busch just got what he could over the course of several late cautions and two red flags to bring home a 20th-place finish.

“We had a lot better M&M’S MIX Camry than we showed in qualifying. We had a pretty good race pace and thought we had a shot at a top-five finish. But the curb thing happened there and sent us spinning, and that ended our chances at a good finish. We’ll move onto Michigan.”