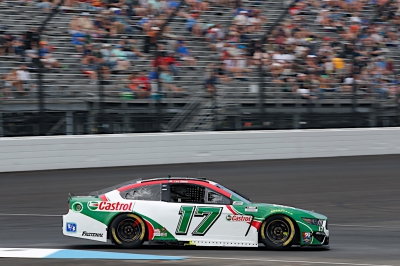 In one of the wildest finishes in recent NASCAR history, Roush Fenway’s Chris Buescher drove his No. 17 Castrol Ford to a 12th-place finish at the inaugural NASCAR Cup road course race at Indianapolis Speedway.

Issues with the track caused a pair of late cautions, with several cars – including Buescher’s – sustaining major damage. Still, Buescher – who restarted 21st – on the final overtime finish, was able to power is Castrol Ford from 21st to 12th on the final restart.

Making his debut in the Castrol Ford, Buescher started the race 19th, based on the morning’s qualifying session and used an alternating pit strategy to run between 10th and 25th the majority of the race. He was able to survive an array of late cautions and move on the 12th-place finish, his 10th finish of 15th or better this season.

The Cup Series heads to Michigan International Speedway next Sunday for 400 miles. Race coverage is set for 3 p.m. ET on NBCSN and MRN, and can also be heard on SiriusXM Channel 90.