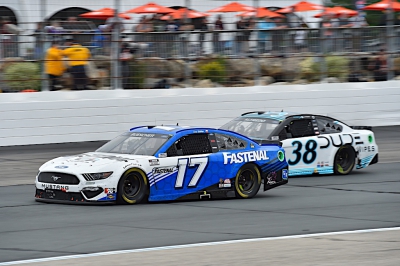 A wild sequence of weather, wrecks and darkness resulted in a shortened race Sunday afternoon in Loudon, with an early incident halting a solid run for Chris Buescher. He would finish the race 29th in his Fastenal Ford Mustang, placing further importance on winning one of the next four races to lock into the NASCAR Playoffs.

A steady mist let up just before the scheduled start of the race, with Buescher taking the green from the 17th position. However, rain began to fall just after the start of the event, with the wet conditions sending several of the leaders spinning through turn two. The incident brought out a red flag that lasted just under two hours.

As the race resumed, NASCAR was forced to reckon with the encroaching sunset and no lights at New Hampshire Motor Speedway. The league informed teams that it would make every effort to complete the scheduled distance of the race, but could shorten the event if needed.

Buescher made quick work of the restart, jumping into the top-15 before more cautions jumbled the pit strategy of the field. He would finish the first stage 21st after electing to pit prior to the end of the segment.

The saying that cautions breed more cautions certainly was true on this afternoon, as a caution just after the start of the second stage once again bunched the field up at the short track. Just laps after that restart, Buescher found himself just behind a spinning competitor and was knocked into the inside retaining wall at the track. He had to pit twice for the Fastenal team to repair damage and returned to the race track a lap down from the leaders in 30th place.

The team tried to play pit strategies to get the lap back, but with the rest of the race running mostly green as NASCAR tried to complete the scheduled distance they were never able to get back on the lead lap. Buescher would ultimately finish in the 29th position.

NASCAR will take two weeks off for the Olympic break, and return to action next at Watkins Glen on August 8. Race coverage there is set for 3 p.m. ET on NBCSN, and can also be heard on MRN and SiriusXM Channel 90.