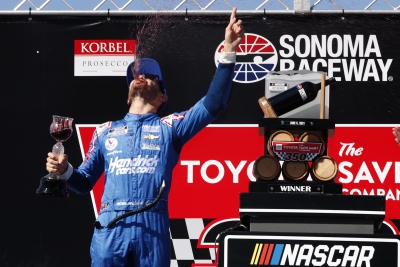 After not hosting a race in the 2020 season due to the COVID-19 pandemic, Sonoma Raceway held the Toyota Save Mart 350 for the NASCAR Cup Series on Sunday afternoon. After 90 grueling laps around the 2.52-mile road course, Kyle Larson reigned victorious to pick up his second straight win.

“It was not easy. No road course is easy; just keeping it on track is tough, especially when you have two of the best behind you on that restart. Chase [Elliott] kept the pressure on and Martin [Truex Jr.] was strong as well. But what an effort and what a car,” Larson said post-race to FOX Sports.

When asked about how special it is to win in front of his home crowd, Larson said, “It means a lot. Northern California, this will always be home to me, even if I live all the way on the east coast now.”

Coca-Cola 600 winner, Larson, started on pole alongside 2020 champion, Chase Elliott. Larson took off from his first-place starting position to put a gap of two seconds between him and second place by the end of lap one.

The scheduled competition caution flew on lap ten, giving teams the opportunity to make adjustments to their cars if needed. Before the caution came out, most of the leaders made their way to pit road to get tires. Of the front-runners, Denny Hamlin, Brad Keselowski, Kevin Harvick, Ryan Blaney, and Cole Custer all decided to stay out before the competition caution.

As stage one drew to a close, William Byron, Chris Buescher, and Michael McDowell made it to pit road before it was closed. Daniel Suarez made an attempt to make it to pit road but entered a closed pit and had to restart at the tail of the field for stage two. Ultimately, it was Larson who captured the stage victory, gaining ten championship points along with one playoff point.

The top-13 drivers stayed out under the stage break, and Kurt Busch was able to lead the field up the hill into turn one.

The first incident-related caution came on lap 31 when Ricky Stenhouse Jr. slammed the wall on the frontstretch with a flat tire. This caution allowed strategy to play out once more with Denny Hamlin leading a majority of the lead lap cars down pit road. After Larson took back the lead under that pit exchange, he drove away to the stage two win.

Kurt Busch, once again, stayed out under the stage break, and he advanced to the lead after collecting stage points in stage two. After leading for two laps, Busch gave up the lead to Chase Elliott until Larson made his way back up to the point on lap 58.

Through varying strategies, Joey Logano and Kyle Busch were able to both lead two laps before they were overtaken by Larson.

With 19 laps to go, Quin Houff’s car came to a halt bringing out the fifth caution of the day. All the leaders pitted under this disruption to action except for Joey Logano, Brad Keselowski, Tyler Reddick, Corey LaJoie, and Anthony Alfredo.

Larson once again took back the lead on lap 76 but when the field got to turn 11, chaos ensued. Ross Chastain spun Corey Lajoie leaving Alex Bowman, Kevin Harvick, and William Byron all with heavy damage. Bowman and Harvick could continue, but Byron ,unfortunately, had to call it a day.

Lap 85 brought trouble to Ryan Preece and Cody Ware. As Preece lost control of his car, he pulled out on track, and Ware piled into his rear-end.

On the restart, Alex Bowman forced Anthony Alfredo into Christopher Bell, spinning Bell around but ultimately leaving Alfredo with the worst damage from the incident.

In the first and only attempt of NASCAR overtime, Kyle Larson was able to build a gap between himself and Chase Elliott en route to his third win of the year.

Next week, the NASCAR Cup Series’ best hit the track at Texas Motor Speedway for the All-Star Race. The event will take place Sunday, June 13th with the open at 6:00pm EST and the All-Star Race at 8:00pm EST; both on FOX Sports One.