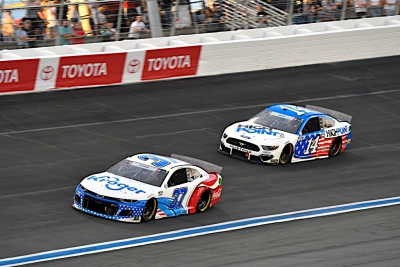 ● On lap 30 while running 20th, Briscoe reported the HighPoint.com Ford Mustang was tight in the front end. The No. 14 team made a scheduled green-flag stop on lap 49 for four tires, fuel and an air pressure adjustment. Briscoe rejoined the field in the 25th position, one lap down.

● Briscoe worked his way back into the top-20 on lap 96 and was the second car one lap down when the green-and-white checkered flag waved to end the first stage. He pitted once again at the break after relaying to the team that his balance was much better. The team gave him four fresh tires, fuel and a slight air pressure adjustment.

● The No. 14 HighPoint.com team made a scheduled green-flag pit stop on lap 149. Briscoe received four tires, fuel and adjustments after saying he was really tight everywhere, but especially in turn three. He returned to the track 26th and was scored two laps down on lap 164.

● When the caution flag waved on lap 174, Briscoe stayed on track to wave around and get one lap back.

● At the conclusion of the second stage, the HighPoint.com driver pitted for four tires, fuel and a chassis adjustment to free up his Ford Mustang.

● On lap 238, Briscoe told the team the HighPoint.com Ford was building really tight. He made his scheduled green-flag pit stop on lap 247 for four tires, fuel and adjustments. As he rejoined the field in 29th, he was told the right-rear tire had a puncture in it, explaining why his Mustang had become a handful.

● With just over 25 laps remaining in the third stage and running 27th, two laps down, Briscoe told the team his car was still too tight. “Nothing seems to be moving the needle,” he reported. “It feels the same after every stop.”

● At the end of the stage, Briscoe pitted for four tires, fuel and another chassis adjustment. The team also made a longer stop to repair the corner of the hood, which was separating from the fender and impacting the balance.

● When scheduled green-flag pit stops began on lap 343 Briscoe reported he was still too tight and bottoming out early in the run.

● The No. 14 team decided to stretch their fuel run out and remained on track until lap 356, when Briscoe finally made his way down pit road for tires, fuel and one final adjustment. He returned to the track in 24th, three laps down.

● The HighPoint.com team was able to gain one spot to sit 23rd before crossing the finish line.

● Briscoe was the highest finishing NASCAR Cup Series rookie for the 12th time this season.

● Kyle Larson won the Coca-Cola 600 to score his eighth career NASCAR Cup Series victory, his second of the season and his first at Charlotte. His margin over second-place Chase Elliott was 10.051 seconds.

● There were four caution periods for a total of 26 laps.

● Denny Hamlin remains the championship leader after Charlotte with a 76-point advantage over second-place Larson.

“We had a really tight-handling HighPoint.com Mustang tonight. It seemed like no matter what we did, we couldn’t make any gains with the adjustments. These races are tough, but I’m definitely looking forward to getting to Sonoma and doing some more road-course racing.”

The next event on the NASCAR Cup Series schedule is the Save Mart 350k on Sunday, June 6, at Sonoma (Calif.) Raceway. The race begins at 4 p.m. EDT with live coverage provided by FS1 and SiriusXM NASCAR Radio.