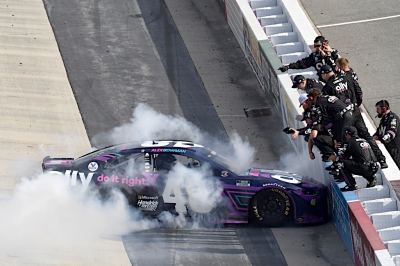 Say this about Alex Bowman, the driver of the No. 48 Chevrolet has got his timing right. The Hendrick Motorsports driver took the lead off pit road following his final pit stop with 97 of 400 race laps remaining, held off the field on two more race restarts and earned his second victory of the year in Sunday’s Drydene 400 NASCAR Cup Series race at Dover (Del.) International Speedway.

The win punctuated a historic Hendrick Motorsports day at the famed one-mile track, with the team becoming the third organization in NASCAR Cup Series history to finish 1-2-3-4 in a single event; joining Peter DePaolo Racing (Dec. 30, 1956 at Titusville, April 7, 1957 at North Wilkesboro) and Roush Fenway Racing (Nov. 20, 2005 at Homestead-Miami). Bowman held off his teammate Kyle Larson by 2.017-seconds. Chase Elliott (third) and William Byron (fourth) finished just behind marking the first time in the organization’s 267-victory history it’s had a four-car sweep atop the scoreboard.

It was actually Larson who paced the field most of the day – leading a race best 263 of the opening 303 laps and sweeping both Stage 1 and Stage 2 victories  - his series-best fifth and sixth stage wins of the season. And at one point, Sunday, he led the field by a full eight-seconds.

But Bowman’s team turned in the single fastest pit stop of the entire 2021 season during a late race caution period and got the car back on track just in front of Larson. Bowman held off his teammate on the restart and pulled away to a comfortable win.

“You guys won that race not me," Bowman excitedly shouted to his team after taking the checkered flag. “I’m so proud of you."

The No. 48 Hendrick Motorsports Chevrolet had a track record 11 previous victories at Dover – all with driver Jimmie Johnson, who retired from fulltime NASCAR competition at the end of the 2020 season. The 28-year old Tucson native, Bowman, just started piloting the No. 48 this year, winning at Richmond, Va. last month - again turning in a late race rally – leading only the final 10 laps en route to that win.

Certainly, the Hendrick Motorsports organization showed early-on Sunday that it was ready to settle the trophy among its drivers. In all, Bowman, Larson and Byron combined to lead 381 of the 400 laps.

As the laps wound down, television cameras captured team owner Rick Hendrick nervously pacing on pit road, well aware of the significance of his four cars atop the scoring pylon.

“I can guarantee you this is the most nervous I’ve ever been in a race," a beaming Rick Hendrick said. “Great day for the organization. And Alex, congratulations to him. This is a sign of the guys working together and bringing good stuff to the track.

“I don’t think it will hit me until tomorrow that we were able to finish one, two, three, four. That’s pretty hard to do, things can happen, pit stops, tires, anything. That’s a first and we’ll take it. It was a great day for us.”

Not only was it a win for Bowman, a seriously strong effort by Larson, but it was also another statement-making day for the 23-year-old William Byron. It marks his 11th straight top-10 finish – making him the youngest in series history to put together a string of excellence like that.

The showing at Dover marks the 11th time in 13 races this season that Hendrick Motorsports has had at least two drivers finish in the top-10. Six times now, three of the team’s four drivers have earned top-10 finishes in the same race.

“We won Richmond and then had a really rough couple of weeks there," Bowman said. “We went to some really good racetracks for us and struggled. I told the guys last week, ‘we’re still the same team that did it at Richmond.’ This is another really good place for us.

“I’m just so pumped for [sponsor] Ally. It feels right to put the 48 back in Victory Lane here after how many races that this car has won here."

All three of NASCAR’s national series will debut at the Circuit of The Americas next week in Austin, Texas. The EchoPark Texas Grand Prix will start at 2:30 p.m. ET next Sunday (FS1, PRN and SiriusXM NASCAR Radio).