35th Place for Briscoe at Dover 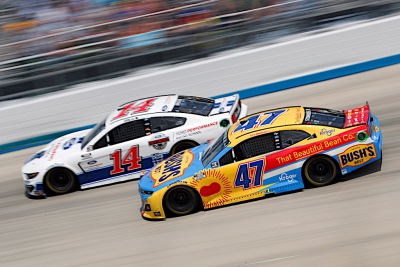 ● At the lap-35 competition caution, Briscoe radioed that his Ford Performance Racing School Mustang started off free and he needed the front tires to cut the corner better. He pitted from the 18th position under the caution for tires, fuel and wedge and air pressure adjustments and restarted 15th on lap 41.

● Briscoe raced quietly in the 15th position until slipping back to 19th on lap 115.

● On the final lap of the first stage, Briscoe lost a right-rear tire going into turn one and made contact with the outside wall. His Ford Performance Racing School Mustang sustained heavy damage to the right-rear quarter panel. Under the stage-ending caution, the No. 14 team made several pit stops for tires, fuel and damage repair, and Briscoe returned to the track 28th, two laps down. He radioed to the team that “there was no warning, it just went.”

● On lap 148, Briscoe reported the Ford Performance Racing School Mustang was really loose and said he felt like he was about to blow another right-rear tire. He pitted under green for four tires and rejoined the field in 35th, seven laps down to the leader.

● The No. 14 driver radioed that the car was still “wrecking loose” after the team made big adjustments to tighten up his Ford Mustang. He was told to take the car to the garage on lap 162 so the team could diagnose the issue.

● Briscoe returned to the track on lap 205 to complete as many laps as possible and finished the stage in the 37th position.

● The No. 14 team continued to soldier its way to the finish despite being some 60 laps down. Briscoe was able to pick up a pair of positions before the checkered flag.

● Alex Bowman won the Dover 400 to score his fourth career NASCAR Cup Series victory, his second of the season and his first at Dover. His margin over second-place Kyle Larson was 2.017 seconds.

● There were seven caution periods for a total of 41 laps.

● Denny Hamlin remains the championship leader after Dover with a 101-point advantage over second-place William Byron.

Chase Briscoe, driver of the No. 14 Ford Performance Racing SchoolMustang for Stewart-Haas Racing:

“Obviously not the day we wanted to have. We had been doing really good improving each race, and I felt like we started off pretty good, but I’m not sure what happened. There was no warning and I just lost the right rear just before the stage end. I hate it for these guys. They work so hard. Hopefully we can rebound next week at COTA and get back going in the right direction, just shake it off. We’ll be OK.”

The next event on the NASCAR Cup Series schedule is the EchoPark Texas Grand Prix on Sunday, May 23, at Circuit of the Americas (COTA) in Austin, Texas. The race begins at 2:30 p.m. EDT with live coverage provided by FS1 and SiriusXM NASCAR Radio.