DiBenedetto Looking to Get a Handle on Dover 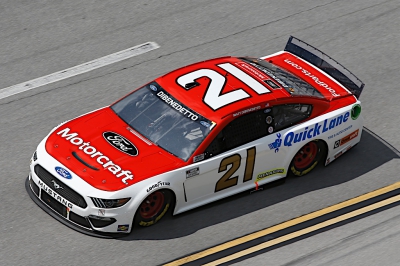 After a couple of mediocre finishes at Dover International Speedway in 2020, Matt DiBenedetto and the Motorcraft/Quick Lane team are looking at this weekend’s Drydene 400 at Dover not as a race to dread but one that presents an opportunity to improve as a team.

“Dover is a track we couldn’t get a grip on last year as far as the speed we needed,” said DiBenedetto, who is set to start Sunday’s race from 18th place. “We’re planning to learn from last year, try something different this time and redeem ourselves.”

He said this weekend’s race on the one-mile concrete oval offers him and the Motorcraft/Quick Lane team a chance to build on its strengths.

“We know we’re good at the mile-and-a-half tracks like Las Vegas and Texas, and we’re strong on the superspeedways,” he said. “This is an opportunity to become more well-rounded.”

DiBenedetto said he’s confident that even without practice, crew chief Greg Erwin and the engineers on the No. 21 Motorcraft/Quick Lane Mustang will come up with a good set-up for the 400-lap race.

He said that even though he and the No. 21 team excel on the concrete oval at Bristol, there a few similarities between the two tracks beyond the type of surface.

“Dover is slick, with less grip,” he said. “We’ll bank what we learned last year and build on it.”

DiBenedetto enters the weekend 17th in the Cup Series standings but is tied in points with 16th place Tyler Reddick, who holds the tie-breaker of best race finish this season.