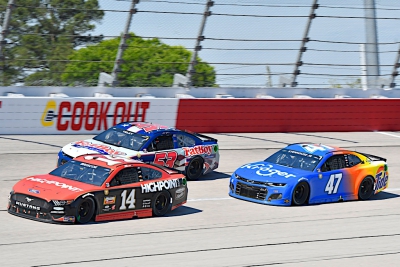 ● Under caution on lap seven, Briscoe reported the HighPoint.com Ford Mustang was extremely tight on exit. He made his first pit stop of the day from the 18th position on lap eight for tires and a track bar adjustment and restarted 30th on lap 12.

● Briscoe continued to fight a tight-handling Ford and prior to green-flag stops reported that the previous adjustments hurt his forward drive. He made a schedule pit stop under green on lap 62 for tires, fuel and adjustments and was scored 21st after all cars completed their stops.

● At the end of the first stage, the HighPoint.com Ford pitted for tires, fuel and adjustments after Briscoe reported he had no side bite.

● The field took the green on lap 98 for the start of the second stage with Briscoe starting 18th, one lap down. A quick caution on lap 100 placed Briscoe back on the lead lap and allowed the team to pit under yellow for fresh tires and fuel.

● When the yellow flag waved again on lap 108, Briscoe only had three laps on his tires, allowing him to stay on track and inherit the second position for the restart on lap 115.

● The HighPoint.com driver gave up the third position on lap 144 to make a scheduled green-flag pit stop for four tires, fuel and adjustments. Briscoe was scored 11th when stops cycled through.

● Briscoe finished the second stage in the 13th position and radioed that the HighPoint.com Ford Mustang became too loose in the back once tires began to wear out. He visited pit road for tires, fuel and chassis and air pressure adjustments.

● On lap 226, Briscoe made a scheduled green-flag stop for tires, fuel and a wedge adjustment. The HighPoint.com Ford Mustang was lacking right rear grip. The No. 14 was scored 14th once the rest of the lead lap cars completed their stops.

● The No. 14 team made their final scheduled pit stop under green for tires and fuel, and Briscoe advanced into 12th place upon returning to the track.

● Briscoe was scored 10th with two laps to go, but during a battle for position, he made contact with the outside wall and ultimately crossed the finish line 11th.

●  Briscoe tied his best result so far this season. His finished 11th on April 25 at Talladega.

●  Martin Truex Jr., won the Goodyear 400 to score his 30th career NASCAR Cup Series victory, his series-leading third of the season and his second at Darlington. His margin over second-place Kyle Larson was 2.571 seconds.

“We definitely wanted more, but coming here with no practice and to come out with an 11th is a really good day. Truly, we were probably an eighth- or ninth-place car. I just got in the fence really hard with 20 to go and killed it for the rest of the race and lost a ton of time. I feel like all year long we have been making baby steps in terms of gains, and we will continue to get better as I get more experience and we learn each other. I’m excited to go to Dover next week. The next couple of races are really good opportunities to run well. We’ve got a lot of racetracks that are good for me and low downforce races which is more similar to the Xfinity Series Mustang. We’ll try to keep building on this and take advantage of starting up front now so we can try to gain some points.”

The next event on the NASCAR Cup Series schedule is the Dover 400 on Sunday, May 16, at Dover (Del.) International Speedway. The race begins at 2 p.m. EDT with live coverage provided by FS1 and SiriusXM NASCAR Radio.