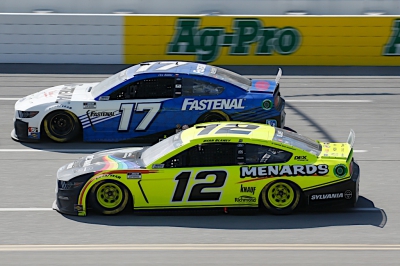 Chris Buescher and the No. 17 Fastenal team turned in a strong performance in Sunday’s NASCAR Cup Series event at Talladega Superspeedway, running the majority of the race inside the field’s top 10. Buescher powered his Ford to as far up as second position during the 500-mile event, picked up stage points in each of the first two segments and was poised for a strong finish before being shuffled into the outside retaining wall in the races’ final lap, resulting in the 21st-place finish.

“The finish there was a tough one,” said Buescher. “It’s hard because our Fastenal team did a great job, and we were up front and in position the whole day. It looked like we were going to be able to make a strong run at the end, but those are the types of things that happen at Talladega. Still, I’m proud of this No. 17 team and the effort we put in today and we’ll regroup and go back after it next week.”

Buescher started the race 21st and wasted little time working his Fastenal machine to the front, advancing to the seventh position by the race’s fourth lap and finishing the first segment in sixth place, picking up early stage points.

The team overcame a pit road speeding penalty and slight damage to the front of the No. 17 Ford during the second stage, battled back inside the top 10 and finished the segment in eighth.

Having run the majority of the final stage inside the top 10, Buescher restarted in sixth position with three laps to go in the race, and was driving to a strong finish before the contact with another car sent him into the unforgiving wall and the 21st-place finish.

Buescher and the No. 17 team return to action next weekend at Kansas Speedway. Race coverage is set for 3 p.m. ET on FS1 and MRN, and coverage can also be heard on SiriusXM Channel 90.