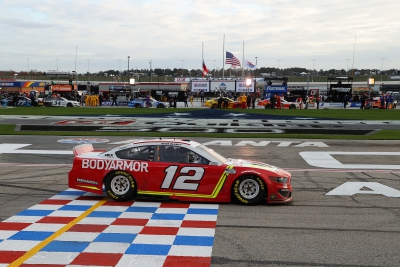 After 50 minutes in the final practice session for the Food City Dirt Race, Ryan Blaney was the fastest with a lap time of 20.172 seconds.

“It’s rough, slick, really rough actually. Larson and Reddick were able to run the top but for only a few minutes,” Blaney said in a press conference after practice when asked how the track conditions were.

“We’re seeing tires cord really quickly. It's going to be interesting when it comes to saving tires on Sunday.”

The lone caution of the practice came with five minutes left when Cole Custer went for a quick spin. A problem for race favorite, Kyle Larson, leaves him starting at the rear for Sunday due to an engine change. Before his engine issues, Larson put down a ten lap run that put him first of 33 drivers in ten lap averages.

On Saturday, the NASCAR Cup Series drivers hit the track for four, fifteen lap heat races in Bush's Beans Qualifying. Catch all the action from Bristol on FOX Sports One at 4:30pm ET.