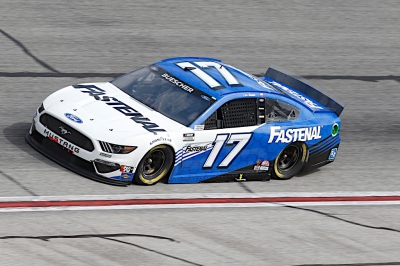 Chris Buescher and the No. 17 Fastenal Ford team secured their first top-10 finish of the season Sunday afternoon with a strong seventh-place finish at Atlanta Motor Speedway. After starting 17th, Buescher quickly made his way into the field’s top 10, where he ran virtually the entire race - scoring stage finishes of 9th and 8th to pick up four valuable stage points.

Buescher rolled off the grid 17th, but quickly worked his way up to 12th by lap 7. When the competition caution flag waved at lap 25, the team visited pit road for four tires and fuel along with a packer and air pressure adjustment. The driver restarted 15th on the bottom lane but shifted back to 18th with reports of a tight Ford Mustang. After fighting back to 15th, the team pitted under green for four tires and fuel to get back on track in 12th. With 30 to go, Buescher maneuvered his way into the top-10 and took the green-white checkered flag in ninth, earning a pair of stage points.

At the stage break, the team pitted for four tires, fuel and tape to restart seventh. Shortly after the field took the green, the caution flag waved after a spin in front. After reconfiguring starting order, Buescher fired off 12th and drove right into the top-10. By lap 139, the driver was up to eighth and maintaining track position. Another fast green flag pit stop at lap 160 got Buescher back on track in ninth. When green flag pit stops cycled through, the team settled into eighth, where they ultimately finished the stage. Buescher also scooped up two more stage points with his finish.

The Prosper, Texas native drove down pit road for four tires and fuel and restarted ninth for the final stage of racing in Georgia. The driver pitted with a caution at lap 219 for fresh tires and fuel. After restarting ninth, Buescher wasted no time working his way through the field. He even passed teammate Ryan Newman for eighth at lap 235. By Lap 245, the driver was running seventh and stayed there until pitting one last time under green. When the pit cycle finished, he was up ninth but worked his way back into seventh with 15 to go. Buescher ultimately took the checkered flag in seventh, earning a solid top-10 finish.

Buescher and the No. 17 team return to action next Sunday, March 28 for the inaugural dirt race at Bristol Motor Speedway at 3:30 p.m. EST on FOX, PRN and SiriusXM Channel 90.