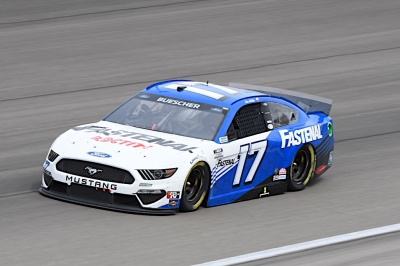 Buescher rolled off the grid 18th but was shuffled back to 21st just seven laps into the race. Reporting a tight Ford Mustang, the driver pitted at the competition caution for four tires, fuel and an air pressure adjustment. Buescher worked his way up to 15th when a caution at lap 46 waved for debris. The team elected to pit again under the caution for four tires, fuel and adjustments. The stop helped Buescher maintain track position as he took the green-white checkered flag for stage one in 15th.

The team visited pit road at the stage break for fresh tires, fuel and a small adjustment. After restarting 21st, Buescher remained quiet on the radio and drove his way up to 19th, right behind teammate Ryan Newman. The stage ran caution-free, and the team pitted for fuel, tires and a track bar adjustment at lap 124 under green. Pit stops cycled through and Buescher settled into the 22nd position before gaining three more positions to finish the stage in 19th.

At the stage break, the team pitted for four tires, fuel and an air pressure adjustment. Buescher restarted 15th, but reported a vibration in his car. Just a few laps later, the caution flag flew, giving the No. 17 team the chance to pit for fresh tires to address the vibration. Buescher had settled into the 21st position when another caution for debris came out shortly after. The team stayed out under yellow and fired off 11th at the next restart. At lap 220, Buescher visited pit road from the 18th position for a scheduled green flag pit stop for fuel and tires. He then gained four spots after driving up through traffic to finish 14th.

Buescher and the No. 17 team return to the track next weekend at Phoenix Raceway on Sunday, March 14th at 3:30 p.m. EST on FOX, MRN and SiriusXM Channel 90.