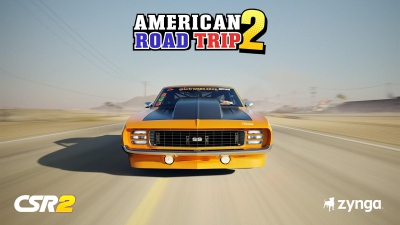 Zynga Inc., a wholly-owned publishing label of Take-Two Interactive (NASDAQ: TTWO) and a global leader in interactive entertainment, today announced that its subsidiary NaturalMotion will host American Road Trip 2 in CSR Racing 2 (CSR2), its hyper-real drag racing game. In the expanded new installment of the popular American Road Trip series, players will join a coast-to-coast U.S. tour celebrating American car culture and the spirit of racing between late June and October 2022. After being awarded a free RAM 1500 TRX truck for their collection, players will race across the country in-game from California to New York, unlocking new cars for their collection as they go.

The new installment also adds over ten new vehicles for players to collect and race including the RAM 1500 TRX, the Ford Mustang Mach-E 1400, the Czinger 21C, the 2022 Hennessey Venom F5, the NASCAR Next Gen Ford Mustang and the Chevrolet ‘Sick Seconds 1.0’ Camaro SS created by Tom Bailey. Bailey is a 4-time winner of HOT ROD Drag Week and his Camaro earned the title of HOT ROD’s Fastest Street Car in America by running 6-second quarter mile passes five consecutive times. He is also the first person ever to have run a 5-second quarter mile pass during competition.

“American Road Trip 2 will bring our players a thrilling summer racing road trip across the country with exciting new vehicles to drive – all without leaving home,” said Julian Widdows, Senior Vice President of Racing at NaturalMotion. “The new series willshowcase the fastest street car in America, Tom Bailey’s ‘69 Camaro SS, and we can’t wait to bring this new adventure to mobile racing fans.”

“It’s great that mobile gamers can now harness the raw power of my ‘Sick Seconds 1.0’ Camaro SS for the first time in CSR2,” said Tom Bailey. “I’m looking forward to seeing players blow by other competitors in the SS, taking advantage of its ability to push over 3,000 HP to its rear wheels. Never settle for second place!”

CSR2 is available to download for free on the App Store as well as on Google Play.