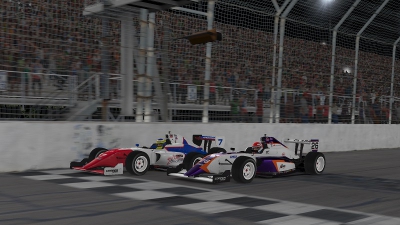 Road to Indy Presented by Cooper Tires veterans RC Enerson and Oliver Askew each scored a narrow victory this evening at the World Wide Technology Raceway oval in Madison, Ill., as a pair of thrilling All-Star Invitational races provided a fitting conclusion to the third season of TireRack.com Road to Indy iRacing eSeries Presented by Cooper Tires competition.
Enerson, from New Port Richey, Fla., edged Canadian Road to Indy aspirant Mac Clark by just 0.013 of a second in the first of two 20-minute virtual encounters, while Askew, from Jupiter, Fla., held off Turn 3 Motorsport team owner Peter Dempsey, who hails originally from Ashbourne, Ireland, by a scant 0.017 of a second to clinch the honors in Race Two.
Dalton Kellett, from Stouffville, Ont., Canada completed the podium in the opening race, as Clark marked himself as a young man to watch in the future by finishing third in Race Two.
Dempsey, whose accomplished driving career included a trio of wins in the prestigious Walter Hayes Trophy Formula Ford event at Silverstone as well as a memorable Freedom 100 Indy Lights victory at the Indianapolis Motor Speedway, laid down a marker in qualifying by securing the SimMetric Driver Performance Labs Pole Award. He immediately settled into the lead in the opening race but was never able to shake off a variety of pursuers as the 20-minute race unfolded.
A series of incidents served to eliminate quite a few of the contenders, leaving Dempsey, Enerson and Clark alone out front as the clock ticked down. Unfortunately for Dempsey, he, too, fell victim to an incident with just a couple of laps remaining. In his stead, Enerson and Clark battled it out wheel to wheel before Lucas Oil School of Racing Chief Instructor Enerson timed his run out of Turn Four on the final lap to perfection by nosing ahead of Clark at the finish line and securing the win.
Kellett, who will drive in this year’s NTT INDYCAR SERIES for AJ Foyt Racing, and former Indy Pro 2000 (Star Mazda) champion Tristan Vautier, from France, who these days is a front-runner in the IMSA WeatherTech SportsCar Championship, were the only other unlapped finishers. Vautier’s performance earned him the Sabelt Hard Charger Award after climbing from 23rd on the grid.
Dempsey was able to recover from his late incident to take the checkered flag in 10th place, which ensured he would once again start from pole position in the partially reversed grid for Race Two.
A group of 10 cars were embroiled in a sensational battle at the front for the first half of the race, with Dempsey looking for redemption and remaining consistently among the top three as positions changed almost constantly around the 1.25-mile oval.
A variety of incidents once again took care of several of the contenders, such that the final 10 laps boiled down to a three-way tussle between Dempsey, Clark and Askew, a championship winner in both the Cooper Tires USF2000 Championship and Indy Lights Presented by Cooper Tires.
The outcome remained in doubt until the final instant. But Askew held the advantage heading into Turn Three on the final lap and just managed to hold onto the victory in a three-wide photo-finish with Dempsey on the outside line and Clark also creeping up on the inside.
Colombian Sebastian Saavedra drove a fine race to rise from 20th on the grid to fourth ahead of USF2000 driver Michael Myers, from Lizton, Ind., and Englishman Stefan Wilson.
With the Road to Indy virtual season now in the books, attention instead will focus on the real-world campaign. First up will be the Annual Spring Training test at Barber Motorsports Park in Leeds, Ala., on April 4-6, which will provide one final opportunity to prepare for the opening double-header rounds for all three series – USF2000, Indy Pro 2000 and Indy Lights – at the same challenging 2.3-mile road course venue in conjunction with the opening round of the NTT INDYCAR SERIES less than two weeks later on April 16-18.
Oliver Askew (#38 Cape Motorsports Tatuus PM-18): “It was insane. iRacing on any oval really, they are all exciting races. I honestly didn’t think I would be in a position to win. I started second to last [in the first race] and made it to the final to start fourth. It was an amazing race and I really enjoyed it. I was on a discord (channel) with Conor Daly, Spencer Pigot, RC Enerson and Aaron Telitz and we were having a good time and having some laughs. I really enjoyed it. It was unfortunate that Conor was knocked out there before the end. We were joking with each trying to shake-and-bake there.”
Mac Clark (#26 Gonella Tatuus PM-18): “That was insane. I think that was some of the best racing we have had this entire eSeries. I am really happy that I could bring home some good results. I owe all of my success to Hinch [James Hinchcliffe] actually as we were out practicing earlier today and he taught me all of his secrets. This feels like a great way to close off the season. I have had issues in one race or another and to finally put the Gonella car on the podium two times in a row feels amazing.”
Peter Dempsey (#3 Turn 3 Motorsport Tatuus PM-18): “It was a lot of fun out there. It beats being at the workshop. We get to have a bit of a break and I can play with the lads. A huge thanks to everyone for putting this on. I had two great races. I was out front for most of them but I got caught out with a rookie error racing the leaders in Race One. I had a bit of redemption there in the second race going from the back to fourth.”
Rate this item
(0 votes)
Tweet
« Season 2 of INDYCAR iRacing Challenge to Take Green Flag March 18 Back to Virtual Reality: IMSA iRacing Pro Series Returns in April »