US Cellular 250 results from Iowa 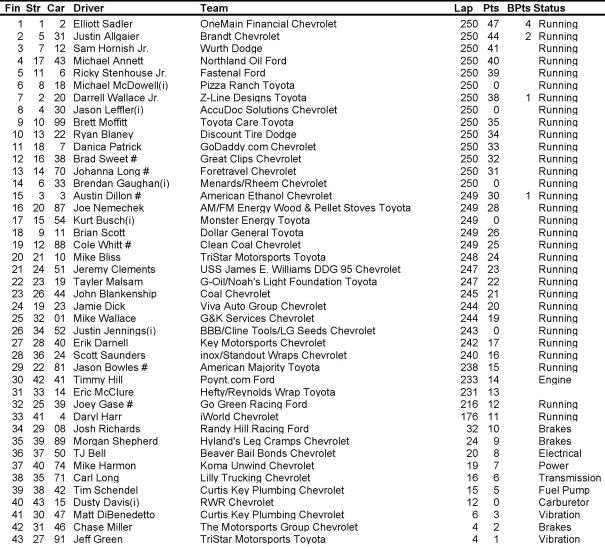 Pennsylvania 400 starting line up at Pocono 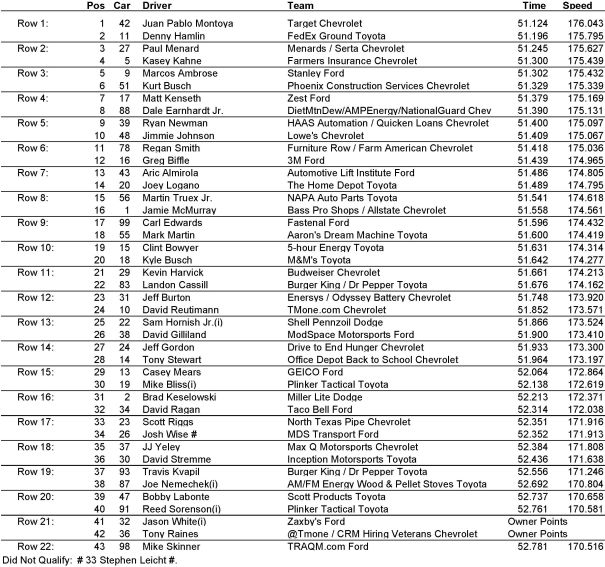 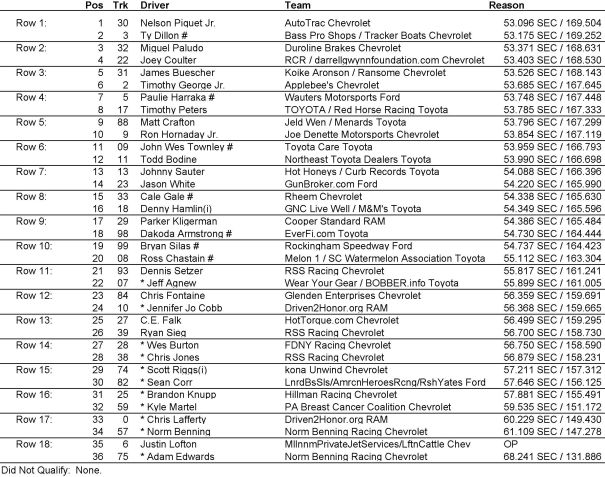 Despite being 16th in Camping World Truck Series points, the #81 entry for David Starr has been withdrawn for the Pocono Mountains 125 this weekend at Pocono Raceway. "We have been very lucky this season with the partners that we have, Zachry, AdvoCare, and BYF to name a few, who have all gone above and beyond to support us this season," Starr said. "But right now, we don't have the money lined-up for a handful of races. We are fortunate and thankful to our partners this season and we're looking forward returning strong with those same partners to our next race this season.

TMone will expand their outsourcing program with Tommy Baldwin Racing (TBR) this weekend at Pocono Raceway. David Reutimann will pilot the No. 10 TMone.com Business Process Outsourcing Chevrolet in the Pennsylvania 400 Sunday, August 5.

TMone is a semi-rural provider of domestic business services and customer relationship management (CRM) outsourcing. With locations in the Midwest and Northern Great Plains, delivers new jobs to America’s hometowns. Call Center Outsourcing is a people business, and TMone is in the business of augmenting and supplementing other companies human capital needs. TMone has grown every year since inception and start-up in 2003 and is on Inc. Magazine’s Honor Roll List of Fastest Growing Privately Held Companies for the last five years.

“A market like Spearfish, South Dakota in the Black Hills near Sturgis and Mount Rushmore is paradise for a client who enjoys the outdoors,” said TMone Vice President of Client Experience Ethan Davis. “Marketing our 534 station call center, outsourcing facility in Spearfish via NASCAR has been extremely effective.”

TMone will also sponsor TBR’s No. 36 @TMone C.R.M. Hiring Veterans Chevrolet this weekend. The CRM Company sponsored one or more cars in all 20 NSCS races this season. The company has teamed up with TBR for nearly half those events, including a primary partnership at Kentucky Speedway, Indianapolis Motor Speedway and co-primary partnership at Daytona International Speedway. Reutimann drove the No. 10 CarportEmpire.com / TMone.com Call Centers in America Chevrolet to TBR’s best finish this season in July when he tallied an 11th-place finish.

“We are pleased that TMone sees the value in supporting our team,” explained Tommy Baldwin. “We are happy to have them on board for both the No. 10 and 36 Chevrolets this weekend. Their continued support helps keep us running, and they are seeing success in outsourcing their branding program to us.”

Reutimann posted the 24th-fastest time in final practice today and is set to qualify tomorrow for Sunday’s 400-mile event.

The NASCAR HOTPASS lineup for the Pennsylvania 400 at the Pocono (Pa.) Raceway is as follows:

Clint Bowyer and the No. 15 5-Hour Energy Toyota team of Michael Waltrip Racing

Joey Logano and the No. 20 The Home Depot Toyota team of Joe Gibbs Racing

On Tuesday, August 7, from 1 - 2 p.m. EDT, Smithfield Foods, Inc. (NYSE:SFD) will host a Twitter event that will give motorsports fans a chance to chat live with NASCAR legend Richard Petty and his driver Aric Almirola. The event will bring fans together to celebrate Petty's 75th birthday.

In anticipation of next Tuesday's event, NASCAR fans are encouraged to Tweet questions during the week leading up to the live event via Twitter using the hashtag, #SFDPetty. Those who Tweet questions using the specified hashtag, either before or during the event, will be entered into a drawing to win a Smithfield prize pack including two tickets to the NASCAR Sprint Cup race in Charlotte, N.C., on October 13, a baseball cap autographed by Aric Almirola, product coupons, a BBQ tool set and more. For more information, please visit http://www.smithfieldcommitments.com/category/whats-happening-now/.

In January, Smithfield Foods entered into a multiyear, integrated partnership with the Richard Petty Motorsports (RPM) NASCAR team. The Smithfield-RPM partnership comes as a natural fit for many reasons.

"The Pettys demonstrate a strong commitment to helping others, which is something we're happy to be a part of," said C. Larry Pope, president and chief executive officer for Smithfield Foods.

As part of its agreement with Richard Petty Motorsports, Smithfield is utilizing various brands and unique, engaging promotional initiatives throughout the racing season to communicate with existing customers and introduce others to the company's many fine products. In addition, a variety of Smithfield brands are adorning the legendary No. 43 Ford as primary sponsor in 15 NASCAR Sprint Cup Series events in 2012. Smithfield brands include Farmland, Eckrich, Gwaltney and Smithfield, among many others.

A member of the inaugural class of the NASCAR Hall of Fame, Petty is one of the most successful and respected drivers in the sport's history, with a record 200 career wins and seven Cup Championships. Petty is also famous for winning the Daytona 500 a record seven times. Earlier this year, Almirola was named as driver of the famed No. 43 Ford and made his debut in the Richard Petty Motorsports-owned entry at Daytona International Speedway.

Martinsville Speedway’s grandstands will be open to fans free-of-charge for an August 7 and 8 NASCAR Sprint Cup Goodyear tire test at the historic half-mile oval. The test will feature the new 2013 Sprint Cup cars.

Restrooms will be open both days, but concession stands will not be operating. Fans may bring refreshments into the grandstands.

The Heisman Trust’s mission is to preserve the integrity of the Heisman Trophy and to provide opportunities for underserved youth and other members of our society.  Since the Trust assumed stewardship of the Heisman Trophy in 2001 it has made donations in excess of four million dollars to over 200 charities throughout the country, affecting countless children.  The Heisman Humanitarian Award was established in 2006 to recognize those in the world of sports who give significantly of themselves to serve their communities and to improve the lives of others.

Gordon has established himself as one of the most recognizable drivers in the world as a four-time NASCAR Cup Series champion; a three-time winner of the Daytona 500 and a four-time winner of the Brickyard 400. The leukemia diagnosis of Gordon’s crew chief’s (Ray Evernham) son in 1992 inspired Gordon to establish his foundation in hopes of helping children facing critical illness to realize their dreams.  The Jeff Gordon Children’s Foundation began as a small mission for one child, but has grown into an organization that has raised more than 11 million dollars for children’s charities over the years.

The Jeff Gordon Children’s Foundation’s mission is to support children battling cancer by funding programs that improve patient’s quality of life, treatment programs that increase survivorship and pediatric medical research dedicated to finding a cure.  Gordon went on to open the Jeff Gordon Children’s Hospital in Concord, North Carolina, in hopes that it will serve as a model to other communities who want to provide the highest quality of care to all their children, regardless of their ability to pay.

"NASCAR fans know Jeff Gordon as one of the greatest drivers in the history of stock car racing, but to a multitude of children and families facing pediatric cancer, he is something far greater: an ally in their battle to live.  Jeff's selfless actions through the Jeff Gordon Children's Foundation exemplify all the attributes we look for in a Heisman Humanitarian honoree," said William J. Dockery, Heisman Trophy Trust President. "The Heisman Trophy Trust is honored to have Jeff become the newest Heisman Humanitarian and join a stellar group of athletes that are truly making a difference in the world.

As part of the award, The Heisman Trophy Trust will donate $50,000 to the Jeff Gordon Children’s Foundation.

Gordon’s primary sponsor in the NASCAR Sprint Cup Series is the AARP Foundation’s "Drive to End Hunger" – an initiative that seeks to eradicate hunger for nine million people 50+.  To date, the program has donated more than 12.9 million meals and driven donor commitments with an expected value of $16.9 million.

Gordon joins an exemplary group of former Heisman Humanitarian winners that includes, Joey Cheek, Olympic speed skating gold medalist, for his dedication and contributions to the children of Darfur; George Martin, former defensive end of The New York Giants, who walked across America to raise funds for rescue and recovery workers at Ground Zero after 9/11; Pat LaFontaine, former NHL star who, through his Companions in Courage Foundation, helped to build interactive playrooms in Children’s hospitals to keep young patients connected to family and friends; Mia Hamm, world-renowned soccer player; who raises funds and awareness for families needing marrow or cord blood transplants and continuing the growth in opportunities for young women in sports; Warrick Dunn, former NFL running back, who has provided

homes for single parent families to honor his mother’s memory; and Marty Lyons, University of Alabama and New York Jets defensive tackle, whose foundation fulfills the special wishes of children with terminal or life threatening illness.

TMone, pronounced T-M-one, is a semi-rural provider of domestic business services and customer relationship management (CRM) outsourcing. TMone is seeking to hire over 150 Veterans immediately for full-time, permanent positions for its U.S.A. Outsourcing OperationsTMone’s employer commitment is part of the Hiring Our Heroes initiative from and U.S. Chamber of Commerce, a nationwide campaign to help veterans and military spouses find meaningful employment.

Listed as one of Inc Magazines’s Fastest Growing Privately-held Companies in the USA for five years, is TMone seasoned in recruiting, staffing and training but admits there is a gap in executing the Veterans Hiring Initiative. Therefore, TMone is seeking the assistance from non-profit groups to achieve the target by 2013 and looks forward to new partnerships to ensure that permanent positions are filled. Partnerships discussions include but are not limited to the Employer Support of the Guard and Reserve (ESGR), RecruitMilitary, The American Legion, the Department of Labor Veterans’ Employment and Training Service (DOL VETS), and the Department of Veterans Affairs.

All of TMone’s jobs are filled in the Heartland of America. TMone’s growth is a direct result of supporting some of the biggest brands in the NASCAR garage. TMone helps service and support other company’s customers so Fortune 1000 clients can focus their human capital on their core businesses, which in return drives jobs internally and externally.

“We committed to hiring as many Veterans as possible and NASCAR is a great way to find them,” said TMone Co-Founder and President Anthony Marlowe. “They are the most respectful and professional people I have ever met and are proven leaders and representatives for our client’s brands.”

TMone has sponsored one or more cars in all 20 NSCS races this season. The company has teamed up with TBR for nearly half those events, including a primary partnership at Kentucky Speedway, Indianapolis Motor Speedway and co-primary partnership at Daytona International Speedway. Reutimann drove the No. 10 CarportEmpire.com / TMone.com Call Centers in America Chevrolet to TBR’s best finish this season in July when he tallied an 11th-place finish.

“TMone continues to be a supportive partner for us,” explained Tommy Baldwin. “Their initiative to hire veterans is very commendable, and we are thrilled to help them spread the word this weekend at Pocono.”

Reutimann will hit the “Tricky Triangle” this weekend for the Pennsylvania 400 Sunday, August 5.