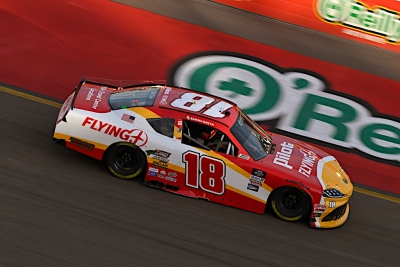 Smith drove in nine NXS races for JGR in 2022. He ran competitively throughout his schedule with one top-five finish and three top-10 finishes. His best result was a third-place finish at Watkins Glen International in August. Smith’s best qualifying effort came at Phoenix Raceway with a second-place starting position.

“Sammy is a fantastic addition to our 2023 Xfinity lineup. He proved to have the passion and the talent to necessary to compete for wins in the races he ran for us in 2022,” said Steve DeSouza, Executive Vice President of Xfinity Series and Driver Development. “We are excited to get him in the No. 18 full time and know he will be competitive from the jump.”

The Toyota development driver made a name for himself in 2022 in the ARCA Menards Series (AMS) winning the ARCA Menards Series East (AMSE) Championship for the second consecutive year and the Sioux Chief Showdown. Smith won six AMS races, five AMSE races, 12 AMS/AMSE pole awards, and finished in the top-five in 15 of the 16 races he entered.

“This is an opportunity I have been working towards,” Smith said. “I can’t wait to get behind the wheel full-time and am looking forward to a great season. I learned a lot in 2022 that will really help me to be competitive and run up front in the Xfinity Series. Thank you to Pilot Flying J, TMC Transportation, Allstate Peterbilt Group, and Toyota Racing Development for supporting me in my racing career. I am excited for next year and appreciate the opportunity.”

Pilot Flying J will continue their primary partnership with the No. 18 and Smith in 2023 after supporting the driver throughout his 2022 NXS stint.

“We’re thrilled to continue our support of Sammy and look forward to seeing him on the track representing Pilot Flying J and the transportation industry,” said David Hughes, Senior Vice President of Sales for Pilot Flying J.

TMC Transportation saw success with Smith as his primary partner during the 2022 AMS/AMSE seasons. The driver/sponsor pair hope to continue their winning ways as Smith moves up to participate in the full NXS schedule.

“TMC is proud to continue its support of Sammy Smith as he takes on the 2023 NASCAR Xfinity Series, said Jason Webb, Executive Vice President of Asset Management at TMC. “Sammy has been a great ambassador for TMC – on and off the track. His growth as a driver is remarkable and we are very impressed with his accomplishments. We can’t wait to see what he will do in the upcoming year.”

Allstate Peterbilt will also return to the team as a primary partner in 2023. Renda Group, Sinclair Tractor, and Mobil 1 are among other sponsors that will support Smith throughout the season.

Jeff Meendering will serve as the crew chief for the No. 18 in 2023. Smith will be eligible to run for the series championship by running the full 2023 schedule.