Herbst Rallies for Seventh in Xfinity Series Finale at Phoenix 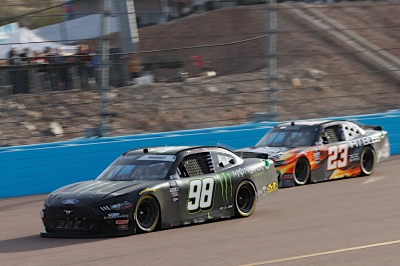 Riley Herbst and the No. 98 Monster Energy team battled for 200 laps to score their 20th top-10 finish of 2022 in the NASCAR Xfinity Series Season Finale at Phoenix Raceway. Herbst rallied from a 19th-place qualifying effort to run as high as third at the start of the second stage. Damage incurred early in the final stage while running in the top-10 and a series of cautions in the final 50 laps wasn’t enough to slow down the Monster Energy driver, who powered from as far back as 25th to seventh to claim his third straight top-10. His 20 top-10s this season is a single-season career high for the 23-year-old from Las Vegas, who closed out his third fulltime Xfinity Series season. He also secured a single-season career high of eight top-fives in 2022.

“This No. 98 Monster Energy team overcame a lot today and I’m really proud with how we ended the season. You always want more, and I wish we could’ve figured out the balance early in the race to maybe have a shot at a top-five, but we battled back at the end and came out with a good finish. Overall, it was a good season, a lot of highs and some lows but I’ve learned a lot and I feel like this team made a lot of progress throughout the year. I’m just proud of the effort these guys put in all year.”

● Herbst finished the year with single-season career highs in both five top-fives (eight) and top-10s (20). He has earned a total of 17 top-fives and 54 top-10s in 109 career NASCAR Xfinity Series starts.

● This was Herbst’s fourth top-10 in seven career Xfinity Series starts at Phoenix.

● Ty Gibbs won Saturday’s race to secure the 2022 NASCAR Xfinity Series Championship. It was his 10th career Xfinity Series victory, his seventh of the season and his first at Phoenix. His margin over second-place Noah Gragson was .397 of a second.

● There were eight caution periods for a total of 49 laps.

The next event on the NASCAR Xfinity Series schedule is the 2023 season opener on Feb. 18 on the Daytona (Fla.) International Speedway.