Herbst Powers His Way to Third at Martinsville 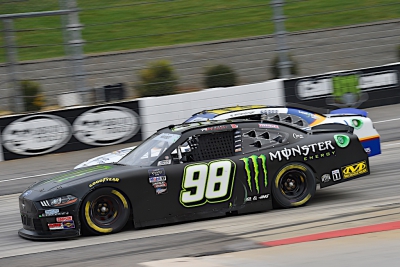 Riley Herbst and his No. 98 Monster Energy Ford Mustang for Stewart-Haas Racing (SHR) survived multiple NASCAR overtimes to equal a season-best finish of third during Saturday’s Martinsville 250 at Martinsville (Va.) Speedway. It was the Las Vegas native’s eighth top-five finish of the season, a career high. After starting eighth for the scheduled 250-lap race, Herbst ran consistently in the top-10 during the first two stages, finishing sixth in Stage 1. Later, with less than 15 laps to go in Stage 2, crew chief Richard Boswell made the call to bring his driver down pit road for fresh tires and fuel, and Herbst resumed 18th. He picked up one position by the stage’s end, then stayed on track during the break and restarted sixth for the final stage. He began to struggle with the balance on his No. 98 Monster Energy Ford Mustang, but Herbst persevered in working his way into the top-five during the opening laps of the stage. Over the final 100 laps, he avoided numerous incidents and remained in or near the top-three during the flurry of NASCAR overtimes. Herbst restarted fifth, in the inside lane, for the final overtime restart and again avoided mayhem among the leaders en route to his first top-five finish at Martinsville.

“That was wild. That’s Martinsville, though. Our No. 98 Monster Energy Ford Mustang was the best I’ve had at this track, and we had a shot to win at the end. We were so close, but to finish third is just a testament to the hard work that this team puts in each and every race. I wish we could go to Phoenix with a chance to win the championship, but we’ve grown so much this season as a team. I can’t thank the guys enough for sticking by me through the ups and downs.”

● Herbst earned his career-best eighth top-five of the season and his first top-five in five career NASCAR Xfinity Series starts at Martinsville.

● Herbst’s third-place result bettered his previous best finish at Martinsville – sixth, earned twice, in October 2020 and in the series’ previous visit in April.

● This was Herbst’s third straight top-10 at Martinsville. He finished 10th last October and sixth earlier this year.

● This was Herbst’s second straight top-10. He finished eighth in last Saturday’s race at Homestead-Miami Speedway.

● Ty Gibbs won the Martinsville 250 under caution to score his 10th career Xfinity Series victory, his sixth of the season, and his first at Martinsville.

● Twenty-three of the 38 drivers in the race finished on the lead lap.