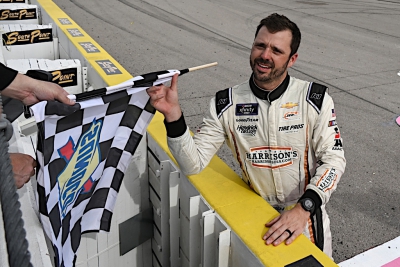 Allgaier, who finished third had a chance at the race win but would make contact with the Turn 4 wall with two laps remaining in the race.

Ty Gibbs and Trevor Bayne would round out the top five.

Hailie Deegan, who started her first NASCAR Xfinity Series race on Saturday, finished 13th. It marks the best finish for a female driver in their first Xfinity Series start.

Josh Berry sits atop the playoff board after his win on Saturday. Noah Gragson, Ty Gibbs and Justin Allgaier make up the top four spots above the cutoff line.

Austin Hill, AJ Allmendinger, Brandon Jones and Sam Mayer all are below the cutoff line with two races left in the Round of 8.

Rounding out the top ten were Austin Hill in sixth, Sam Mayer in seventh, Daniel Hemric in eighth, Brandon Jones in ninth and Anthony Alfredo in tenth.