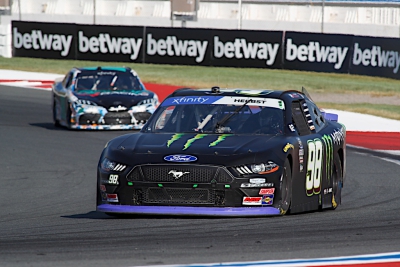 A 32nd-place finish in the Drive for the Cure 250 NASCAR Xfinity Series race Saturday at the Charlotte (N.C.) Motor Speedway Roval ended Riley Herbst’s playoff run. The driver of the No. 98 Monster Energy Ford Mustang for Stewart-Haas Racing had finished among the top-five in each of the race’s first two stages – fifth in Stage 1 and second in Stage 2 to earn a total of 15 bonus points – before getting entangled in an eight-car accident in turn two of the 2.28-mile, 17-turn road course 12 laps short of the finish. Heading into the final stage, Herbst was five points above the playoff cutline before contact from the No. 18 car of James Davidson on lap 48 damaged the right-rear corner of the No. 98 machine. This necessitated an unscheduled pit stop, which put Herbst deep in the 38-car field and ultimately contributed to him being collected in the multicar wreck. One final incident during a late-race restart on lap 69 ended Herbst’s race for good, leaving him 20 points shy of advancing to the Round of 8.

“Man, we had a shot to make it to the next round. I wish the outcome had been different. We were having such a strong race and then one small incident of contact in the final stage derailed it all. I wish we could’ve stayed out of trouble and advanced, but there’s still four races to go and four chances to win. We’ll regroup and head to Las Vegas.”

● AJ Allmendinger won the Drive for the Cure 250 to score his 15th career Xfinity Series victory, his fifth of the season and his fourth straight at the Roval. His margin over second-place Ty Gibbs was .582 of a second.

● There were nine caution periods for a total of 15 laps.

The next event on the NASCAR Xfinity Series schedule is the Alsco Uniforms 302 on Saturday, Oct. 15 at Las Vegas Motor Speedway. It will be the fourth race of the seven-race playoffs and the first in the Round of 8. The race starts at 3 p.m. EDT with live coverage provided by NBC and SiriusXM NASCAR Radio.