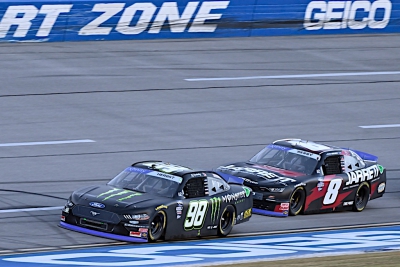 Riley Herbst brought home an 11th-place finish despite an ill-handling No. 98 Monster Energy Ford Mustang in Saturday’s Sparks 300 at Talladega (Ala.) Superspeedway. In the second race of the Round of 12 of the NASCAR Xfinity Series Playoffs, Herbst started 23rd and made quick work of utilizing the draft to move his way forward. He was 14th by the day’s first caution on lap three, and then entered the top-10 on lap 12. In typical superspeedway fashion, the field was shuffled forward and backward during the opening two stages, which Herbst finished 11th and 12th, respectively, just missing out on scoring bonus points each time. He restarted the final stage 16th and worked his way up to seventh when the field went single file during the early laps of the run. Crew chief Richard Boswell opted to bring his driver down pit road in the second wave of green-flag pit stops on lap 68 for a quick, fuel-only stop. When the field cycled through the round of stops, the 23-year-old driver was ninth. The final stage went caution-free, and Herbst struggled to find speed in his racecar and ultimately finished just outside the top-10. It left him 10 points below the top-eight cutoff with one race to go in the Round of 12.

“It was a weird superspeedway race, to be honest. I feel like we just lacked overall speed, which isn’t like us at these tracks. We couldn’t jump above the cutline for the playoffs, but we’re going to another unpredictable track next Saturday. The Roval will be tough, too. We know what we have to do and we’ll do it.”

● Herbst’s 11th-place finish was his third consecutive top-12. He finished fifth in the regular-season finale Sept. 16 at Bristol (Tenn.) Motor Speedway, and fifth in last Saturday’s playoff opener at Texas Motor Speedway in Fort Worth.

● AJ Allmendinger won the Sparks 300 to score his 14th career Xfinity Series victory, his fourth of the season, and his first at Talladega. His margin over second-place Sam Mayer was .015 of a second.

● There were three caution periods for a total of 11 laps.

● Twenty-three of the 38 drivers in the race finished on the lead lap.

The next event on the NASCAR Xfinity Series schedule is the Drive for the Cure 250 on Oct. 8 on the Charlotte (N.C.) Motor Speedway Roval. It will be the third race of the seven-race playoffs and the final of the Round of 12. The race starts at 3 p.m. EDT with live coverage provided by NBC and SiriusXM NASCAR Radio.