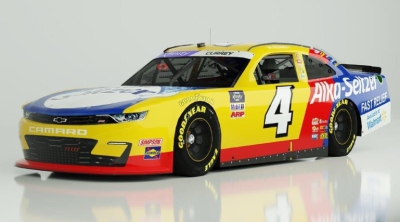 JD Motorsports and Bayley Currey’s No. 4 team are throwing it back to recognize one of the original Alka-Seltzer drivers - Terry Labonte - with a special paint scheme this weekend at Talladega Superspeedway.

Alka-Seltzer will be the primary sponsor for Bayley Currey’s No. 4 Chevrolet at the Sparks 300 at Talladega Superspeedway on Saturday, October 1. This will mark Alka-Seltzer’s fourth appearance with the team so far this season.

The No. 4 Alka-Seltzer Chevrolet will feature Labonte’s Alka-Seltzer paint scheme from the 1997 Busch Grand National season.

During his partnership with Alka-Seltzer, Currey has been vocal about how the previous drivers who have represented Alka-Seltzer on the track have also inspired him in his own racing career. Now he’ll be literally driving the colors of those legendary drivers.

“Terry (Labonte) is pretty cool, he’s another Texan like me,” said the 25-year-old Currey. “We both raced around Texas at the same tracks when we were coming up in our racing careers. I’ve always looked up to Terry, and I can’t wait to be driving his colors around Talladega.”

The Alka-Seltzer partnership is managed by A.E. Engine. In addition to its sports sponsorship sales and marketing efforts, A.E. Engine is also the official publisher of the NASCAR-licensed magazine NASCAR Pole Position.