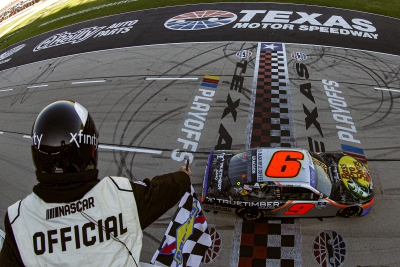 Noah Gragson (No. 9) coming across the start finish line to take his seventh checkered flag of the year. This win will move him automatically into the Round of 8 in the NASCAR Xfinity Series playoffs. Getty Images

For a driver to have been the first to win four straight Xfinity Series races since Sam Ard did back in 1983, Noah Gragson just wanted to focus on one thing only; a cowboy hat for his Cole Swindell concert he was attending to that night. The 24 year old Las Vegas native can’t party too hard on Saturday evening when rocking out on the big stage, because he will be piloting the No. 16 Chevy Camaro for Kaulig Racing for 500 miles on Sunday at Texas. “I need a cowboy hat,” quoted Gragson in the media center. “I need to dress appropriately for the culture down here. Those last couple of laps, I was thinking, ‘We need to find a strip mall that sells cowboy hats so we can look cool in this concert.’”

The race at Texas Motor Speedway  wasn’t one that everyone knew Gragson was going to win, even though he put the Bass Pro Shops Chevy in the lead on three separate occasions for a total of 85 laps led. Early in the race, Truck Series championship contender and last year's winner John Hunter Nemecheck led early and often in the hot sunny track in Texas. He would end up being involved in a crash on lap 116, when a big pile up involving Brandon Jones, Justin Allgaier, and several others took race winning contenders out of the race.

In the 2 hours and 38 minutes it took to complete the 300 mile event, 17 of the 38 drivers entered were wiped out either due to a crash or mechanical problem. If Texas wasn’t in the same round as Talladega and the Charlotte Roval, some would have considered this the wildcard event. With laps winding down, AJ Almendinger, who was also involved in the same pile up as Nemecheck, looked like he was going to have a great shot of winning with the fuel mileage/tire wear kicking into effect. However, with just 17 laps to go in the event, the Dinger had to pit, which left Jeb Burton in the lead until Gragson passed him with new tires.

Saturday evening's win was Gragsons fourth straight since Darlington, seventh overall this year, and 12th overall. However, Dale Earnhardt Jr., who owns JRM, told the media center, “I don’t believe he’s afraid of the spotlight. I think he gets nervous, but he finds ways to calm their nerves down and get focused on winning. He will do great in the Cup, which is something I wouldn't have said until this year since he has matured.” The Xfinity Series will take on the wild and crazy Talladega Superspeedway next Saturday afternoon, for the second race of the Round of 12.