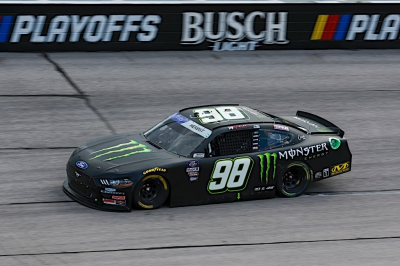 Riley Herbst and the No. 98 Monster Energy team for Stewart-Haas Racing (SHR) saw an abrupt and early end to their day in Saturday’s Sport Clips Haircuts VFW Help A Hero 200 NASCAR Xfinity Series race at Darlington (S.C.) Raceway. After starting eighth and finishing sixth in Stage 1, having made an impressive save to keep his Ford Mustang from making contact with the outside wall after getting shoved up the racetrack on lap four, the 23-year-old from Las Vegas was penalized for speeding while exiting pit road during the stage break. He restarted 21st when the race went back to green on lap 54 to start Stage 2. On the very next lap, Herbst slid into the inside SAFER Barrier exiting turn two while trying to avoid a two-car incident in front of him. His racecar sustained left-front damage that the team was unable to repair under the allotted NASCAR Damaged Vehicle Policy time limit.

“It was 100-percent my fault. I ran sixth (to end the first stage) and I have to do what I can do and I didn’t do that. I sped off pit road and put us in the back. And when you run in the back, accidents happen like that off (turn) two, and then you get collected into it. I don’t know, it’s tough, but at the end of the day, I was in control of our good track position. I had one of the best racecars I’ve ever had, especially here at Darlington. It was so much fun in this heat, sliding around. But I threw it all away by speeding on pit road and you can’t do that.”

● Noah Gragson won the Sport Clips Haircuts VFW Help A Hero 200 to score his ninth career Xfinity Series victory, his fourth of the season, and his second at Darlington. His margin over second-place Sheldon Creed was .794 of a second.

● Twenty-five of the 38 drivers in the race finished on the lead lap.

● AJ Allmendinger remains the championship leader after Darlington with a 51-point advantage over second-place Ty Gibbs.

The next event on the NASCAR Xfinity Series schedule is the Kansas Lottery 300 on Sept. 10 at Kansas Speedway in Kansas City. The race starts at 3 p.m. EDT with live coverage provided by USA and SiriusXM NASCAR Radio.