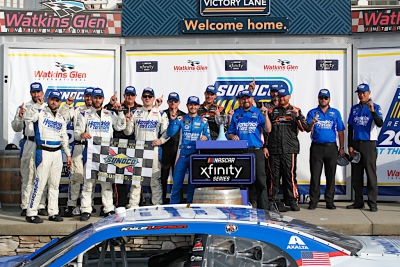 “I got lucky. I think my only shot really was if Gibbs and Byron really got racing. I just wanted to help William down the front-stretch as much as I could then they got to battle up the esses.

“I tried to help William get clear to the bus stop. They raced side-by-side into there, got together and and the seas parted and I was able to get through. Then I had AJ behind me so I was just trying yo hit my marks as best as I could. He had me definitely nervous out in front of him,” Larson told NBC Sports post-race.

During the final restart with five laps to go, Byron and Gibbs both raced for the lead as they both entered the bus stop. Larson, who was running third at the time saw the battle ahead of him. He would then see Gibbs get loose and spin out collecting Byron as well.

That costly mistake would give Larson the race lead ahead of AJ Allmendinger in second.

Allmendinger would catch up to Larson within a car length on the final lap however, it would not be enough to take over the top spot.

Rounding out the top five were AJ Allmendinger in second, Sammy Smith in third, Noah Gragson in fourth and Kaz Grala in fifth.

Rounding out the top ten were Sam Mayer in sixth, Riley Herbst in seventh, Sheldon Creed in eighth, Josh Berry in ninth and Jeremy Clements in tenth.