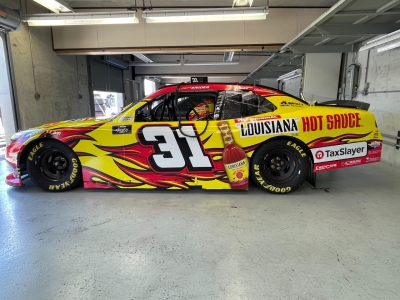 - Practice; After the completion of a brief 20-minute practice session on Friday afternoon, Myatt Snider would record a fast lap of 93.422 at 93.986 mph on Lap-3 of his 6-lap practice session putting the No. 31 Louisiana Hot Sauce Chevrolet Camaro SS 27th fastest of the 42 cars entered for Saturday’s NASCAR Xfinity Series (NXS) Pennzoil 150.

– Starting Position; Immediately after practice teams would move into NXS qualifying to determine the starting order for Saturday afternoon’s Pennzoil 150. In 2022, road course qualifying would consist of two rounds of group qualifying with the first round consisting of 15-minutes of two groups with the fastest five cars in each group moving onto the second round for a 10-minute session to determine the pole sitter. Snider would run a fast lap of 92.086 at 95.350 mph in Group A putting the No. 31 Louisiana Hot Sauce Chevrolet Camaro 13th in the group at the end of the 15 minutes failing to transfer on to the fast-10. At the conclusion of qualifying Snider would fall into the 25th starting position inside Row 13 for Saturday’s Pennzoil 150

– Indianapolis Motor Speedway Road Course Stats; Saturday’s Pennzoil 150 will mark Snider’s third NXS start at the Indianapolis Motor Speedway (IMS) Road Course. In July of 2020, Snider would make his NXS debut at the 2.439-mile road course incorporated inside the World-Famous IMS. Snider would start in the 26th position after the use of the qualifying matrix and would as high as sixth when the final pit stop would be out of fresh tires and would fade back to the 16th place at the conclusion. The 2021 edition would once again prove Snider’s strength would be the road courses, after qualifying in the eighth position, Snider would come home one spot better in the seventh spot after running second in the final stage until the rear tires went away at the end of the Pennzoil 150. In two races at the IMS Road Course, Snider holds an average finish of 11.5.

In the same race Jordan Anderson Racing Bommarito Autosport would field a car for Sage Karam who would make his NASCAR debut at the same Indianapolis Motor Speedway Road Course he had competed on so many times before in his IndyCar. Advancing thru the field the entire day Karam would advance into the Top-Ten late in the race until Justin Allgaier would move Karam out of the way on the final restart which would trigger a battery connection issue causing Karam to drop from the running order in the closing laps resulting in a 26th place finish.

- Tax Slayer: TaxSlayer is an easy-to-use online tax filing platform with unlimited support at a fraction of the cost of the competition. Trusted for over 50 years, the Augusta-based tech company successfully completed more than 10 million federal and state e-filed tax returns in 2021 and processed $15 billion in refunds. With over 15,000 reviews on consumer review site Trustpilot, 85% of customers rate TaxSlayer Great or Excellent. On top of ensuring 100% accuracy, TaxSlayer has a maximum refund guarantee and is committed to providing the right tools at the right price. For more information, visit Taxslayer.com.

– Chassis; Jordan Anderson Racing Bommarito Autosport will bring Chassis No. 104 back to the track after repairs were made after receiving a significant amount of front-end damage at Road America in the large accident during the final stage of the Henry 180 resulting in a 33rd place finish. Prior to Road America, Chassis No. 104 competed for JAR at Portland International Raceway for the Pacific Automation 147, a race where Snider would have a career day leading 19 laps, capturing the JAR’s first Stage Win, running in the Top-5 for ¾ of the race enroute to a second-place finish. Before Portland, Chassis No. 104 would sit idle since March at Circuit of the Americas (COTA) in the Pit Boss 250 a race where Snider would avoid trouble all day and was able to come home with a strong 6th place finish. In three races in the 2022, Chassis No. 104 holds an average finish of 13.66.