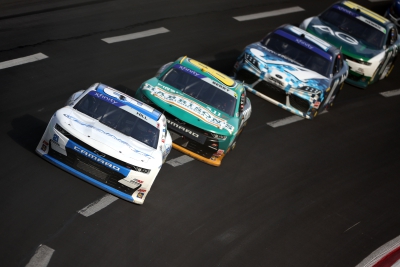 Austin Hill became a two time winner in the Xfinity Series Saturday evening, after snatching up his second victory at his home track of Atlanta Motor Speedway. Hill beat out Josh Berry on the final lap to win by 0.111 seconds in a race that took 1:57:36 hours to complete.

The race had a total of six cautions that took 28 of the 163 laps under yellow conditions, and had 17 lead changes throughout the course of the day. The average speed through the 250 mile event was 128.071 mph.

Next week, the stars of the Xfinity Series will race at New Hampshire Motor Speedway, to race the Crayon 200. It will begin at 2:30 p.m. Eastern on USA, PRN, and SiriusXM NASCAR Radio.