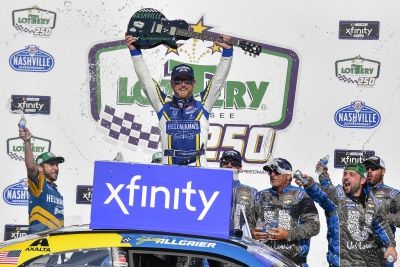 A dominant car for Justin Allgaier and JR Motorsports resulted in his second win of the season and first career victory at Nashville Superspeedway on Saturday.

It was by no means easy, though, as strategy dictated the latter portion of the race.

On Lap 116 of 188, Jeffrey Earnhardt spun from 12th place while battling Sheldon Creed as Allgaier led the field after winning Stages 1 and 2.

All but eight drivers – including AJ Allmendinger, Brandon Jones, Noah Gragson and Daniel Hemric – elected to pit for their final set of sticker tires under caution.

Though as they say, cautions breed cautions.

On the ensuing restart, Jeb Burton got into the left rear of Creed, also collecting Joe Graf Jr., ending the latter two drivers’ days. The race stayed green from there however after the Lap 131 restart, for the final 58 laps of the day.

That left Allgaier enough time to make his march back to the front of the field a year after finishing runner-up to the Xfinity Series’ winningest driver, Kyle Busch, at the same track.

Allgaier regained the lead from Allmendinger on Lap 149 and set sail for the final 40 laps of the race.

“What a heck of a race. Been coming here a long time and love this racetrack,” Allgaier said.

“Been trying to go to victory lane so bad and haven’t been able to do it. Today was for the dirt racers though – it was slick, it was hot, we were sliding around. Just proud of this team.”

Allgaier led a season-best 134 laps, and when asked the last time he had such a dominant car was, Allgaier said simply:

Trevor Bayne was able to finish second after having various problems on pit road throughout the day; Riley Herbst hit one of his crew members, and the team later had an equipment interference penalty.

Rounding out the top-five were Herbst, Ty Gibbs and Sam Mayer.

Gibbs and Mayer – who fought previously after an on-track dust-up at Martinsville in April – had another run-in on Saturday.

With about 40 laps remaining, Mayer took advantage of Gibbs leaving space on the bottom of the track in turn three, driving underneath him. Gibbs’ car got loose from the air with no contact being made until Gibbs used the side of Mayer’s car to straighten his back up.

Gibbs was later able to pass Mayer back without further incident.

Allmendinger holds the lead in the standings by 25 points over Gibbs.

The Xfinity Series returns to action next Saturday with the Henry 180 from Road America. Coverage begins at 2:30 p.m. ET on USA.