Herbst Rebounds for Eighth at Texas 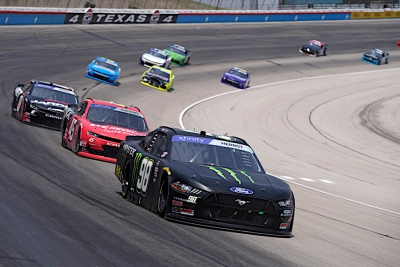 Riley Herbst and his No. 98 Monster Energy Ford Mustang for Stewart-Haas Racing (SHR) rebounded from a midrace penalty to earn a solid eighth-place finish in Saturday’s SRS Distribution 250 NASCAR Xfinity Series race at Texas Motor Speedway in Fort Worth. It was Herbst’s sixth consecutive top-10 and ninth of the season, second-most in the series. After starting 10th, the Las Vegas native ran inside the top-12 for a majority of the first stage as he battled a tight-handling racecar in the Texas heat. Adjustments by the No. 98 team enabled Herbst to hold his position in the top-10 for the entire second stage. But a pit-road penalty during the stage break sent Herbst to the rear of the field for the ensuing restart. Savvy driving by Herbst rallied the No. 98 Monster Energy Ford Mustang back into the top-10 by lap 111. He picked up two more positions before the checkered flag.

“It was a good day. We got another top-10, so that’s good. We just struggled with speed a little bit and we had some struggles on pit stops, which put us back a few times. We were able to work our way back up inside the top-10, though, so that’s good for the team. We’ll take this and work on some things for Charlotte.”

● Tyler Reddick won the SRS Distribution 250 to score his 10th career Xfinity Series victory, his first of the season and his first at Texas. His margin over second-place William Byron was 1.825 seconds.

● Twenty-four of the 38 drivers in the race finished on the lead lap.

● AJ Allmendinger remains the championship leader after Texas with a 44-point advantage over second-place Noah Gragson.

The next event on the NASCAR Xfinity Series schedule is the Alsco Uniforms 300 on May 28 at Charlotte (N.C.) Motor Speedway. The race starts at 1 p.m. EDT with live coverage provided by FS1 and SiriusXM NASCAR Radio.