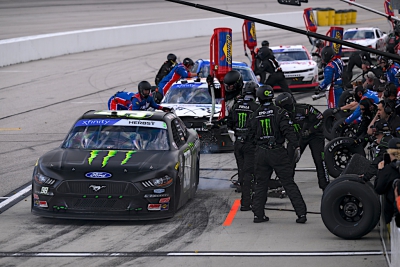 Riley Herbst drove to a strong third-place finish in the Mahindra ROXOR 200 NASCAR Xfinity Series race Saturday at Darlington (S.C.) Raceway. It was the best result this season for the driver of the No. 98 Monster Energy Ford Mustang for Stewart-Haas Racing and it was his best finish in five career Xfinity Series starts at Darlington. Herbst started eighth in the 147-lap race around the 1.366-mile oval after the field was set by metrics when Friday’s qualifying session was rained out. He held steady in the top-10 through the first stage to finish fifth and pick up six valuable bonus points. He maintained his presence amongst the top-10 through the second stage, finishing 10th and earning one more bonus point. Crew chief Richard Boswell and the No. 98 Monster Energy pit crew put Herbst in a good position on the last pit stop of the race – gaining him three spots on pit road and sending him back onto the track with four fresh tires. Herbst wasted no time making forward progress, and on the race’s final restart, he was fourth on the bottom lane. The 23-year-old Las Vegas native pushed his way into the third spot to earn his fifth straight top-10.

“We were pretty good the first stage. The second stage we were even better, and then I messed up on the restart and spun the tires and finished the second stage in 10th. I was pretty bummed out about that and, luckily, we were able to get our track position back to where we ran all day in the fourth or fifth spot and ended up third. Another top-five and another top-10 is just what we need – consistency – and I think we’re doing a pretty good job.”

● Herbst earned his fourth top-five of the season and his second top-five in five career NASCAR Xfinity Series starts at Darlington.

● Herbst’s third-place finish was his best result so far this season. His previous best was a pair of fourth-place drives – Feb. 19 at Daytona (Fla.) International Speedway and March 19 at Atlanta Motor Speedway.

● Justin Allgaier won the Mahindra ROXOR 200 to score his 17th career Xfinity Series victory, his first of the season and his second at Darlington. His margin over second-place Noah Gragson was .259 of a second.

● There were eight caution periods for a total of 33 laps.

● All but five of the 38 drivers in the race finished on the lead lap.

● AJ Allmendinger remains the championship leader after Darlington with a 25-point advantage over runner-up Gragson.

The next event on the NASCAR Xfinity Series schedule is the Texas 250 on May 21 at Texas Motor Speedway in Fort Worth. The race starts at 1:30 p.m. EDT with live coverage provided by FS1 and SiriusXM NASCAR Radio.