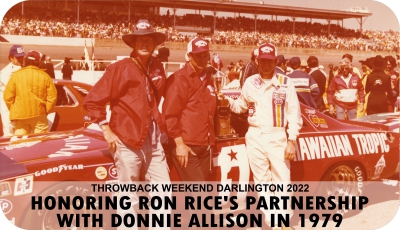 It’s Throwback Weekend at Darlington Raceway, and JD Motorsports and sponsor Habana Brisa are throwing it back to one of the most famous race cars in NASCAR history.

In Saturday’s Mahindra ROXOR 200 Xfinity Series race, Bayley Currey will drive the No. 4 Chevrolet carrying a large decal honoring the No. 1 Hawaiian Tropic car driven by Donnie Allison in the 1979 Daytona 500.

Allison came within a mile of winning the world’s biggest stock car race in a red Hawaiian Tropic-sponsored Oldsmobile fielded by car owner Hoss Ellington. Allison and rival Cale Yarborough crashed while racing for the lead in the third turn on the final lap, opening the door for third-place Richard Petty to win the race. Donnie and his brother Bobby engaged in a nationally televised fight with Yarborough after the wreck.

The finish – and the fight – elevated NASCAR’s nationwide appeal and made that red race car famous.

It will live again – almost a half-century later -- in Saturday’s race as part of a decal featuring Donnie Allison and Ron Rice, the developer of Hawaiian Tropic then and Habana Brisa now. Habana Brisa is Rice’s new reef-friendly brand of sunscreen.

“It’s a great race car – then and now,” said Rice. “We’re pleased to bring it out of history and back on the racetrack again – and now with the Habana Brisa signature.”

Rice said Bayley Currey’s driving style reminds him of Donnie Allison, who won 10 NASCAR Cup Series races before retiring in 1988. Much of Allison’s success is linked to the paint scheme that will be honored Saturday at Darlington.

“I can see Donnie’s driving style in Bayley,” Rice said. “They are very similar on track in a lot of ways. Honoring Donnie’s car is a great way to remember the good times and success we had in those days and to introduce Habana Brisa to a new generation of race fans.”

Currey will be carrying the Habana Brisa colors and Allison’s history on one of the NASCAR tour’s most historic tracks. In the sun-splashed Pee Dee region of South Carolina, it will be a good day for the arrival of Habana Brisa.

“I’ve known Ron since I was 15 years old and I remember his love of racing and his friendship with Donnie.  Not only is Ron Rice an entrepreneurial legend, he’s one of the nicest people you’ll ever meet. I’m honored to be leading his new company Habana Brisa.” said Wendy Holly, Habana Brisa CBO.

“It’s going to be a great weekend at Darlington with this special car and Habana Brisa,” said JD Motorsports team owner Johnny Davis. “I remember how special that No. 1 car looked on the race track, and I hope we can bring some of that kind of flavor to the race with this car Saturday.”