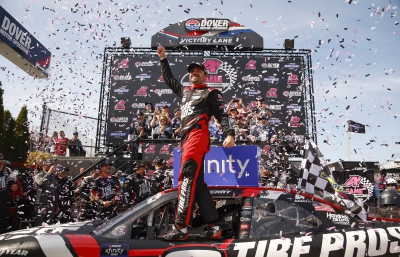 On a beautiful and sunny day at the renamed Dover Motor Speedway, Josh Berry and the No. 8 JR Motorsports team captured the checkered flag for the first time in 2022, and for the third time in Berry's career.

Leading the final 55 laps of the race, Berry was able to get around teammate Justin Allgaier in an exciting battle during the final stage as the two drivers were the class of the field for much of the day.

Allgaier led a race-high 67 laps and won Stage Two, ultimately finishing runner-up to Berry. Their teammate, Sam Mayer, won Stage One and led 18 laps, but had to recover from a lost wheel and later a pit road speeding penalty. He was able to rejoin the top-five in the closing laps, finishing fifth.

A complimentary Berry gave a nod to his pit crew during his postrace interview.

"The pit crew did a phenomenal job today, they executed when we needed it," he said. "We were there when it counted.

"Both times I've raced here, I've gone toe-to-toe with Justin (Allgaier) the whole time -- he is so good here."

A dejected Allgaier had thoughts of what could have been after his pit crew lost several spots on pit road throughout the day, including the final stop when they lost three more, causing him to restart fifth with less than 50 laps remaining.

"Yeah, it's just disappointing. I feel like we gave one away," Allgaier said after his 34-race winless streak was extended another week. "We felt like that last run there, we were really good. ... Just came up a little bit short."

Jones led 59 laps but had to come back down pit road after his pit stop before Stage Three to tighten lugnuts, effectively ending his day.

The margin of victory was .604 seconds, and there were five cautions for 36 laps.

The NASCAR Xfinity Series returns to action next Saturday for the Mahindra ROXOR 200 at Darlington Raceway on Throwback Weekend. Coverage begins at 1:30 p.m. ET on FS1.