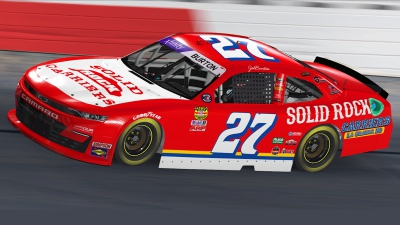 In 1992, Ward Burton, Jeb’s father, was an up-and-coming talent, cutting his teeth in what is now known as the NASCAR Xfinity Series. He was called on to drive the No. 27 Gwaltney’s Chevy that season. Driving for Alan Dilard Jr. and Crew Chief Rick Ren, Ward secured his first national series win. Ward had 3 top-5’s and 10 top-10’s during that breakout season that helped catapult a career that saw him win the Southern 500 and the Daytona 500. 30 years later, the No. 27 is still in the Burton family. A special tribute to the Gwaltney’s car will feature Solid Rock Carriers logos.

“It’s great to see that scheme back on track. That was a fun year with a great group of guys. Winning that race, in Rockingham, was a thrill for me as I was just getting my career started. The fact that Jeb will race this scheme at Darlington is cool for me as well. Winning the Southern 500 in 2001 was a special moment for me and I’m proud to see that legacy carry on with Jeb.”

Jeb talks about what the scheme means to him, “This scheme is special to me, it’s where we got the inspiration to use the No. 27 this season. It’s a number that’s significant to not just my dad but to me as well. When I first started in go-karts, I used the No. 27. I even made my NASCAR debut by driving the No. 27 in the Truck Series. The win dad had with this scheme at Rockingham was huge for his career. Hopefully we can have one more win with those colors. Big thank you to Solid Rock Carriers for allowing us to do this. Hopefully we can make them proud!”