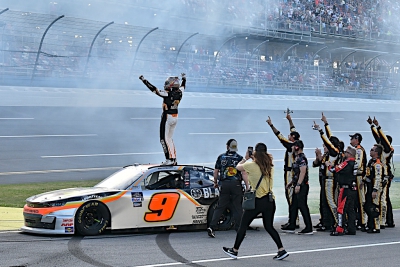 The black No. 3 machine driven by Jeffrey Earnhardt would be denied leading the first lap of the day when Ty Gibbs motored past him on the low line. But it wouldn’t last long as three laps later Earnhardt would once again take the lead to the pleasure of the crowd around Talladega that cheered him as he took back the lead with help from his RCR teammates.

But with just a dozen laps in the race would slow down when Ryan Ellis would loop his car that had been running near the rear of the field to bring out the first caution of the day.

With the green flag back in the air and half the first stage laps completed the back-and-forth battle between three RCR teammates, and two Kaulig Racing machines of Cassill and AJ Allmendinger all fighting for the lead. In the end it would be short track ace Josh Berry driving for Jr Motorsports that would take home the first stage win of the day.

As laps began to wind down in stage two Mason Massey would lose a tire off turn two to stack the field up which would also involve C. Smith Berry, Moffitt, Ellis and Yeley.

Chandler Smith and Massey would climb from their cars to end their day with just 49 laps completed.

The stage would end under the caution handing Justin Allgaier the stage two win.

Just as the final stage started to close in on its halfway point chaos would ensue on the back as Ty Gibbs would spin in the outside line to collect his teammate, Brandon Jones. Gibbs' car would end up stopped by the wall and end his day much to the cheer from the crowd in the stands. The incident would also collect Hemric, Starr and Ellis all of which would continue along with Jones as the race would go back green with 32 laps to go.

Hemric would drive his car to the garage after attempting to make repairs to the car to end his day. Ellis and Starr would make repairs to get going but three laps after the green flag but were unable to make minimum speed causing NASCAR to send both to the garage joining both Hemric and Gibbs.

Caution would once again fly for the sixth time as Matt Mills would ride the wall up in turn one and two dropping debris on the track with under 20 to go.

With under 10 to go it wouldn’t last long as Jones and Dollar would tangle down in turn two to collect Vargas, Snider, Brown and others.

With the white flag closing in, AJ Allmendiner would run up on the bumper of Sam Mayer getting him loose and cutting down the track into race leader Austin Hill bringing out the 8th caution of the day. Hill would drive away and head to pit road to make repairs to his cars before continuing but ending up laps down.

Jones who had been involved in several incidents prior would get the free pass but fail to meet minimum speed and be sent to the garage ending his day.

As NASCAR overtime engaged Creed and Bacarella would tangle a half lap from the white flag setting up a second shot at a green-white-checkered.

When it was all over Noah Gragson would prevail over Jeffrey Earnhardt by .131 seconds followed by AJ Allmendinger, Ryan Sieg and Landon Cassill.

The NASCAR Xfinity Series returns next weekend at Dover Motor Speedway next Saturday, April 30th at 1:30 p.m. on FS1.