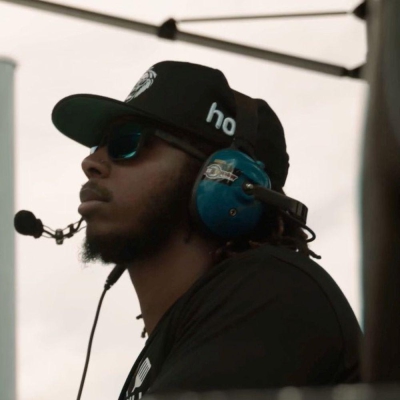 On Friday, Williams expanded his involvement in NASCAR. He has expanded his investment into Graf’s racing platform – in addition to joining fgrACCEL, a full-service sports marketing and management agency where Williams will serve as director of business development.

A friendship that was sparked through fgrACCEL’s Nate Blasdell, Williams will continue to work with Graf to expand his current relationships in the sport, while also working to continue bringing new interest to not only Graf but the growing list of fgrACCEL clients.

Williams, 24, will be heavily involved in fgrACCEL’s day-to-day business interactions, while also planning to increase his at-track presence throughout the season, including attending next month’s season-opener at Daytona (Fla.) International Speedway.

Williams is also the managing partner of Ancient World Gaming, a professional eSports and Entertainment team.

"Antonio has already been an incredible asset to our team and will showcase even more with his new position at fgrACCEL," said April Wiesner, chief operating officer at fgrACCEL.

"He brings the same drive, dedication and passion to everything he does, whether that's on the football field, in the creation of his eSports team Ancient World Gaming or to business development at fgrACCEL. I'm thrilled to see him step into a bigger role overall with the organization."

Despite his additional responsibilities with fgrACCEL, Williams reiterated his focus on assisting Graf to achieve the pinnacle of the sport by competing in the NASCAR Cup Series in the near future.

“Last year being my first year involved with NASCAR was more than I expected,” said Williams. “What Joe showed was the potential he has and with our new partners in Ford, Stewart-Haas Racing and Roush Yates, I know we will be in the position to be even more competitive this year.

“Expanding my footprint into the sport with my new duties at fgrACCEL will only continue to accelerate my knowledge of the multiple sectors within the sport. We are opening new doors this year not only for Joe – but the other members of the fgrACCEL team and I look forward to seeing the success of everyone throughout the 2022 season.”

For Graf who is entering his third season of Xfinity Series competition at Bobby Dotter’s SS GreenLight Racing team, his relationship with Williams is priceless.

“Antonio has done so much for me as a competitor both on and off the track,” said Joe Graf Jr. “He has not only been a huge investor into my career, but we have become incredible friends. His leadership and vision for 2022 will not only be beneficial for me but for the other members of the fgrACCEL team too.

“He is devoted to increasing a new commitment to fgrACCEL, but also continue building that bond that we share and be at my side as much as he can. He’s not just an investor or a friend, he is family.”