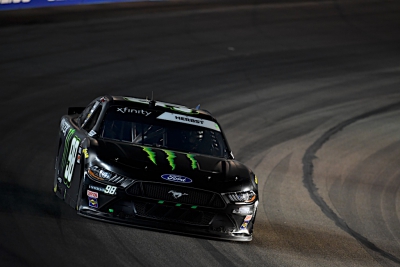 Riley Herbst seized the opportunity of a green-white checkered finish and powered his way from seventh to finish fourth in the NASCAR Xfinity Series season finale Saturday night at Phoenix Raceway. The driver of the No. 98 Monster Energy Ford Mustang for Stewart-Haas Racing was a top-10 mainstay during the 204-lap race, which went four laps past its scheduled 200-lap distance due to the green-white-checkered. Herbst proved resilient, for after starting fifth, he dealt with power-steering issues and a racecar that was too loose at the start of a run and too tight at the end of a run. Nonetheless, Herbst finished ninth in the first stage and 10th in the second stage. A bevy of cautions in the final laps placed Herbst seventh for the green-white-checkered finish. When the green flag dropped, Herbst darted through the traffic ahead of him to pick up his fifth top-five of the season and his second straight fourth-place finish at Phoenix. The result was also Herbst’s second consecutive top-10 as he finished 10th in the series’ prior race at Martinsville (Va.) Speedway. Herbst ended the year 11th in the championship standings, bettering his point standing from 2020 when he finished 12th as an Xfinity Series rookie.

“I think we had a little bit going on with the motor and the power steering, so the short runs we were loose and it was really hard to drive because I couldn’t counter-steer to the right, just because the power steering was going in and out. I was begging for long runs because once we got spread out and I could start just being easier on the front tires and then, ultimately, be easier on the steering. Thank you to Monster Energy, Ford Performance and Stewart-Haas Racing. It’s a good way to close out this year after kind of a really bumpy year to be honest with you. Hopefully, we can go into 2022 pretty strong.”

● Hemric earned the Xfinity Series championship by virtue of his win.

● Twenty-nine of the 36 drivers in the NASCAR Xfinity Series season finale finished on the lead lap.

The 2022 season kicks off with the Beef. It’s What’s For Dinner. 300 on Saturday, Feb. 19 at Daytona (Fla.) International Speedway. Live coverage will be provided by FS1 and SiriusXM NASCAR Radio.