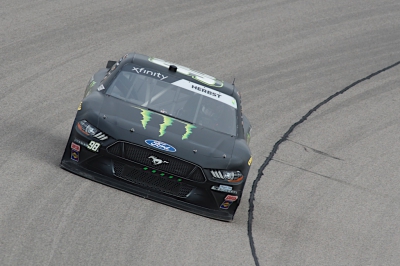 Riley Herbst and the No. 98 Monster Energy team rebounded from an unscheduled pit stop for a flat tire during the final stage and finished 13th. It was their 17th top-15 of the season. The third-generation racer from Las Vegas rolled off 13th for the 200-lap race. He climbed as high as 10th before reporting that he was struggling to turn the right front because of a tight-handling racecar. After staying out during the lap-20 competition caution, Herbst was unable to overcome the balance issues of his No. 98 Monster Energy Ford Mustang and fell back to 15th, where he finished the first stage. Crew chief Richard Boswell called his driver down pit road during the break for four tires, fuel and a double adjustment. Herbst restarted 11th on lap 52. As the second stage went caution-free, the Monster Energy driver continued to struggle with a tight Ford Mustang over the long run. He finished 11th in the stage, and the No. 98 team pitted for four tires, fuel and an adjustment during the break. When the green flag waved for the final stage on lap 96, Herbst restarted ninth and avoided an incident during the opening laps of the final stage and took over the sixth position. He continued to run in the top-10 until a restart on lap 108, when his car fired off too tight and he fell back in the field. On lap 122, Herbst made contact with the wall while running 11th and was forced to pit for four tires and fuel due to a right-rear flat. He rejoined the field 30th, one lap down, but kept the fight alive by racing up to 22nd in just nine laps. The team caught a caution on lap 136 and took the wave-around to regain the lost lap. While he initially struggled on old tires, Herbst caught another break with a caution on lap 155 and was able to pit for his final set of tires and fuel, hoping the race would go green to help with the team’s strategy. The Monster Energy driver raced his way all the way up to 11th before another caution on lap 178 ruined the strategy. Herbst restarted fifth with 16 laps to go in the race. Unable to hold off competitors with fresh tires, he fell back to 14th on the restart, then picked up one position before the checkered flag.

“Not the day we were hoping for, but I’m proud of the No. 98 Monster Energy team for never giving up. We recovered from that right-rear flat in the final stage and looked like we could finish in the top-10, but the cautions didn’t play out in our favor at the end. We’ll head to Martinsville.”

● Ty Gibbs won the Kansas Lottery 300 to score his fourth victory in 18 Xfinity Series career starts. His margin over second-place Austin Cindric was .759 of a second.

● Twenty-two of the 40 drivers in the Kansas Lottery 300 finished on the lead lap.

● Cindric and AJ Allmendinger emerged tied atop the championship standings with third-place Justin Allgaier 38 points back.

The next event on the Xfinity Series schedule is the Dead On Tools 250 on Saturday, Oct. 30, at Martinsville (Va.) Speedway. The race starts at 6 p.m. EDT with live coverage provided by NBCSN and SiriusXM NASCAR Radio.