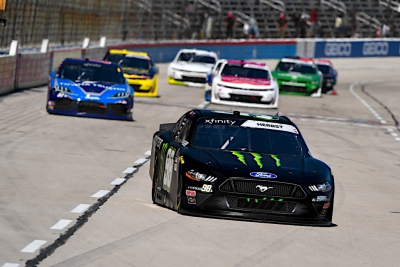 After a 200-lap battle in the Lone Star State, Riley Herbst and the No. 98 Monster Energy team brought home their 16th top-15 finish of the 2021 season. The Las Vegas native finished 12th in Saturday’s Andy’s Frozen Custard 335 at Texas Motor Speedway in Fort Worth. After starting 20th, Herbst wasted no time in his drive forward, moving up to 16th by lap eight. When the competition caution came out on lap 20, the 22-year-old driver reported that his No. 98 Monster Energy Ford Mustang fired off fine but became tight. Crew chief Richard Boswell kept Herbst out on the track to stick to the team’s pit strategy. After the lap-26 restart, Herbst ran as high as 13th for the remainder of the stage. A late-stage caution on lap 40 presented an opportunity for the No. 98 team. Herbst pitted for four tires, fuel, and a double adjustment to combat his tight-handling racecar. A majority of the leaders stayed out at that time, so while Herbst finished the stage in 20th, he was able to restart the second stage in sixth. When the race went back green on lap 52, the Las Vegas native was consistent. He ran as high as fifth and reported that his Ford Mustang was the best it had been all day. Herbst finished sixth to earn five bonus points and restarted the final stage seventh on lap 98 after a scheduled pit stop. He was battling for eighth when an accident brought out the caution flag on lap 100. The team kept its driver on the track to restart eighth. Herbst struggled in the dirty air on the restart and fell back to 14th. When the caution came out on lap 142, Herbst was running 13th. He reported that the car was good, but he continued to struggle with passing, similar to many other competitors. The No. 98 Monster Energy team brought its driver down pit road for four fresh tires and fuel. Herbst continued to run in the top-12 after the restart. He was 11th when another caution flag flew on lap 172. Boswell made the call to bring Herbst down pit road for the final stop of the race to put on four tires and fill up on fuel. In the final 21 laps, Herbst battled in the top-12, where he ultimately finished.

“Man, Texas is a tough track. We struggled with a tight Monster Energy Ford Mustang initially. During the second stage, we really showed some speed while running in the top-10. Unfortunately, it was hard to pass all day, so when we got shuffled back to 12th on the final restart, it was hard to get back up to the front. We’ll take what we learned and head to Kansas.”

● John Hunter Nemechek won the Andy’s Frozen Custard 335 to score his second career Xfinity Series victory, his first of the season and his first at Texas. His margin over second-place Daniel Hemric was 1.316 seconds.

● There were ten caution periods for a total of 54 laps.

● Nineteen of the 40 drivers in the Andy’s Frozen Custard 335 finished on the lead lap.

● A.J. Allmendinger remains the championship leader after Texas with an four-point advantage over second-place Cindric.

The next event on the Xfinity Series schedule is the Kansas Lottery 300 on Saturday, Oct. 23 at Kansas Speedway in Kansas City. The race starts at 3 p.m. EDT with live coverage provided by NBC and SiriusXM NASCAR Radio.