Herbst Finishes 34th at the Roval 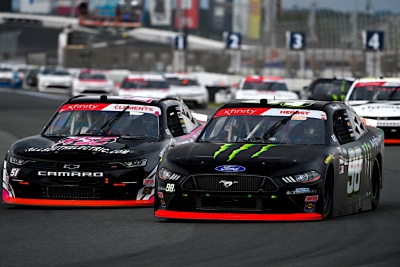 Bad luck found Riley Herbst and the No. 98 Monster Energy team again as a mechanical issue took them out the race seven laps shy of the checkered flag in Saturday’s Drive for the Cure 250 presented by Blue Cross Blue Shield of North Carolina at the Charlotte (N.C.) Motor Speedway Roval. Herbst’s day started strong after rolling off ninth for the scheduled 67-lap race. Despite reporting that he needed more rear and lateral grip in his Ford Mustang during the first stage, he stayed in the top-10 to finish seventh and earn four valuable stage points. He restarted the second stage 13th after pitting for four tires, fuel, and a major air-pressure adjustment. Herbst ran in the top-15 until the lap-29 caution. After a red flag for repairs to the track on lap 30, crew chief Richard Boswell brought his driver down pit road for four tires, fuel, and a wedge adjustment to combat a still-loose racecar. He restarted 28th and was told to play it safe so he could make a run in the final stage. He finished 15th in the second stage but was able to stay on track when a majority of the leaders pitted. He restarted the final stage fifth on lap 43. Herbst stayed in the top-10 for the opening laps of the stage, but trouble found him on lap 55 when the 22-year-old driver reported that something broke in the rear of his Ford Mustang. He attempted to stay on track and finish the race but was forced to pit on lap 61 to have the team look at the issue. The team’s playoffs hopes were dashed as Herbst was forced to head back to the garage on lap 61. He was scored 34th.

“I think a truck arm broke – or something broke – when we were running seventh or eighth in the final stage. We didn’t have the pace to win, but it just stinks because maybe if Las Vegas didn’t happen, we would've been OK with a seventh-place finish. It is what it is. We can still race for a win this year. My primary goal this year was to win a race, so we still have races left to achieve my goal and we’ll try to do that.”

● Allmendinger won the Drive for the Cure 250 to score his 10th career Xfinity Series victory, his fifth of the season and his third straight on the Roval. His margin over second-place Austin Cindric was 3.192 seconds.

● There were seven caution periods for a total of 13 laps.

● Twenty-seven of the 40 drivers in the Drive for the Cure 250 finished on the lead lap.

● Allmendinger is the championship leader after the Roval with a six-point advantage over second-place Cindric.

The next event on the Xfinity Series schedule is the Andy’s Frozen Custard 335 on Saturday, Oct. 16 at Texas Motor Speedway in Fort Worth. The race starts at 3 p.m. EDT with live coverage provided by NBC and SiriusXM NASCAR Radio.