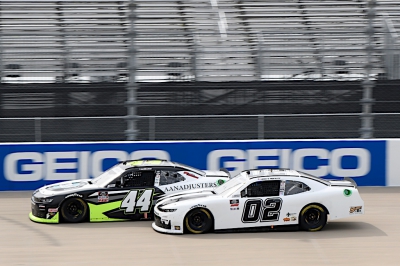 The Our Motorsports team had a tough day in Music City for the Tennessee Lottery 250. The No.02 of Brett Moffitt suffered an equipment malfunction which led to a 23rd place finish. The No.23 of Natalie Decker started 36th and battled hard for a 26th place finish in her 3rd Xfinity start.

The 188 lap, 250 mile race began with Moffitt qualifying 18th and Decker in 36th. During the first stage both Our Motorsports cars remained consistent in their starting positions, resulting in both an 18th and 36th place finish at the end of stage one. Both cars came in for four tires, fuel and adjustments. Moffitt reported that his car was free off the corners during the first stage.

At the start of stage two, Moffitt rolled off 10th with Decker behind him in 30th.

Moffitt remained in the top 15 for several laps during the stage, but by lap 80 Moffitt was in the 17th position. Decker was racing in the 33rd position at the end of the stage.

When the green flag came back out during the final stage, Moffitt started 16th and Decker in 30th. Moffitt was running 18th before suffering an equipment malfunction that caused him to go two laps down. By the time the checkered flag waved, Moffitt was 23rd and Decker was 26th.

Decker took to Instagram after the race stating that she learned a lot and had fun driving the No.23. Decker mentioned that she didn’t have a lot of experience at tracks like Nashville and was happy to see improvements with every lap. She will be back in the No.23 July 3rd at Road of America for her fourth Xfinity start.

The NASCAR Xfinity Series returns to action next weekend at Pocono Raceway in Long Pound, PA. The Pocono Green 225 Recycled is set for Sunday, June 27 at 12 p.m. ET on NBCSN.